In the playground with Erika Eros 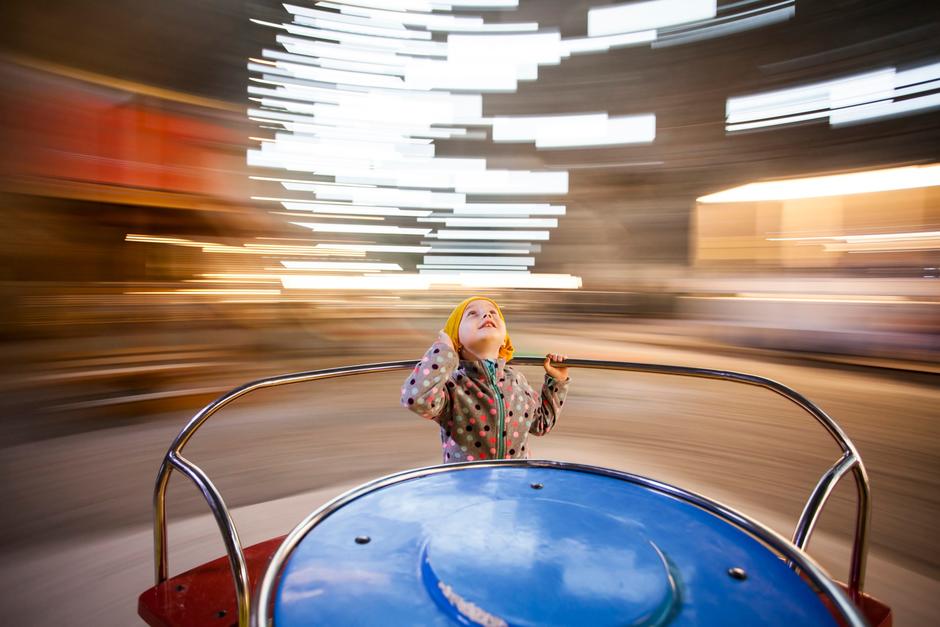 Erika Eros, winner of the crowd vote in our Theme Parks contest, shares the story behind her winning photo 'In the playground'.

"This picture was taken 42 meters underground, in the Salt Mine of Turda (located in Transylvania, Romania – rated on many websites as a must see). It's definitely one of the coolest underground places in the world. I used to get there with my daughter for many hours, to make the most of the health benefits of the salty atmosphere in the mine.

This salt mine is a unique place: you can play pool, bowling or table tennis, you can take a ride on the ferris wheel or a boat ride on the salt lake (which goes even deeper underground). There is also a playground there (my daughter`s favourite place!) and a merry-go-round. When we tried the merry-go-round for the first time, I immediately observed the great "point of view" I had when sitting face to face with my daughter. So the next day, I took my camera with me and tried to take a photo of what I had in my mind: that moving "world" with one sharp point: my child.

After several attempts at setting the exposure time (the photos were either too sharp or too blurred), I eventually found the best time-exposure for the camera. At first I thought I might need a longer exposure, but 1/8 sec was enough to capture the movement.

The light conditions were perfect: in a dark (but not too dark) place like the salt mine, I could use a longer exposure time to get that movement effect. My daughter was also "cooperative", without knowing, because she enjoyed going around, and was chatting and laughing with me the whole time. The biggest challenge was in protecting my camera, and to make sure I didn't fall off when trying to push the merry-go-round!

The post-processing was simple. All I did was add a little bit of contrast and saturation to the picture to make it more colourful, as a child's world should be."