Magnum's Martin Parr is a master photographer of post-war Britain. We look at how he shoots his colourful and vivid scenes of everyday life 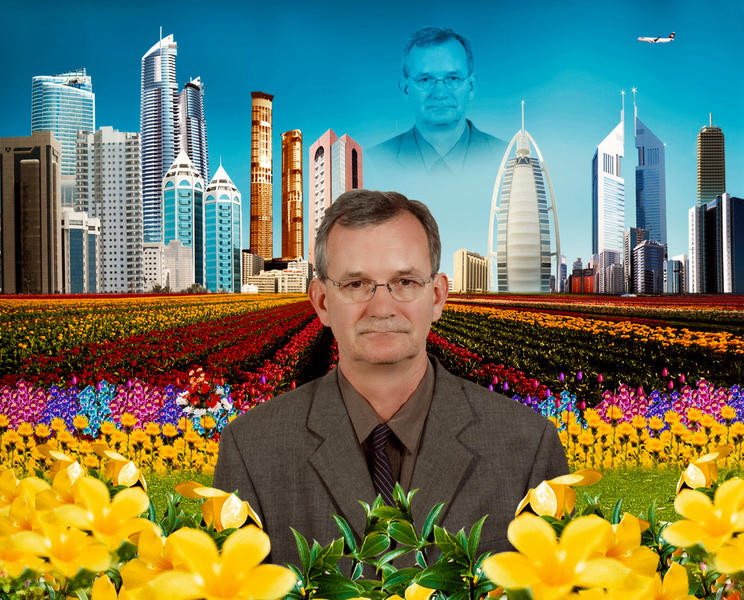 Use humour to convey a message

Employing humour and irony is part of a lengthy tradition in the British art world. Parr has done his part to see it very much has its place in photography. And he uses it to convey a message about his subject, whether it concerns vanishing post-war Britain or the divisions between social classes. Humour is a powerful method for engaging an audience. Essentially, humour makes a message more palatable to the viewer. 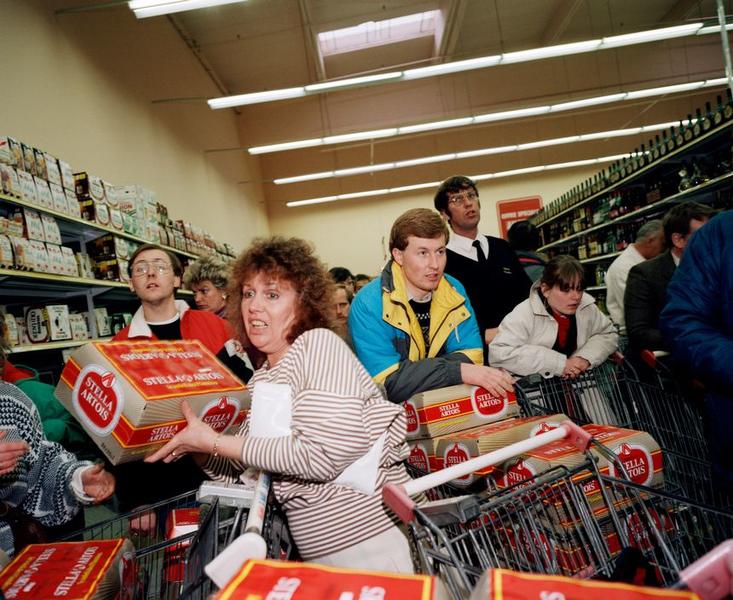 Commit to a series or theme

One thing that can often be disheartening is finding a photographer that is undoubtedly talented but seems to lack focus in terms of subject matter. What’s especially pleasing about Parr’s work is his commitment to themes, whether it’s the West of Ireland or his images of food. While each of his images could work as standalone pieces, they are actually components in a series. The lesson is, don’t sit around feeling satisfied with one or two good images. Push your ideas, produce more, make something big. Don’t be satisfied until you have a body of work that revolves around a message and idea. 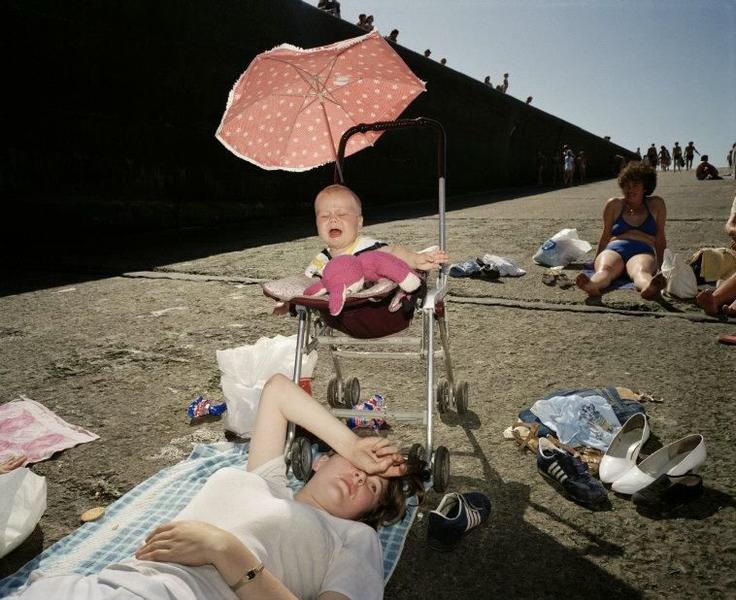 Focus on the mundane to reveal the extraordinary

Look through the work of photographers such as William Eggleston, Stephen Shore and Martin Parr and you will see scenes that to a passer-by would look boring and unworthy of attention. But through the very act of photographing these mundane scenes, they become invested with magic. Often mundane scenes make the most interesting subjects as they are the very scenes we overlook in our everyday lives. Rather than looking for that incredible landscape or beautiful outbreak of light, try looking at the immediate world around you.

In his early days, Parr shot with black & white film. However, he soon gravitated towards colour and shot using Fuji 400 Superior, Agfa Ultra and Fuji 100. His early work with colour film and flash allowed him to – in his own words – develop his hallmark ‘colourful, bright, garish, cheap and nasty’ aesthetic. While black & white is a beautiful thing, colour is a truer representation of the world. If you want to create honest pictures of the world in which you live, then this is something to consider. 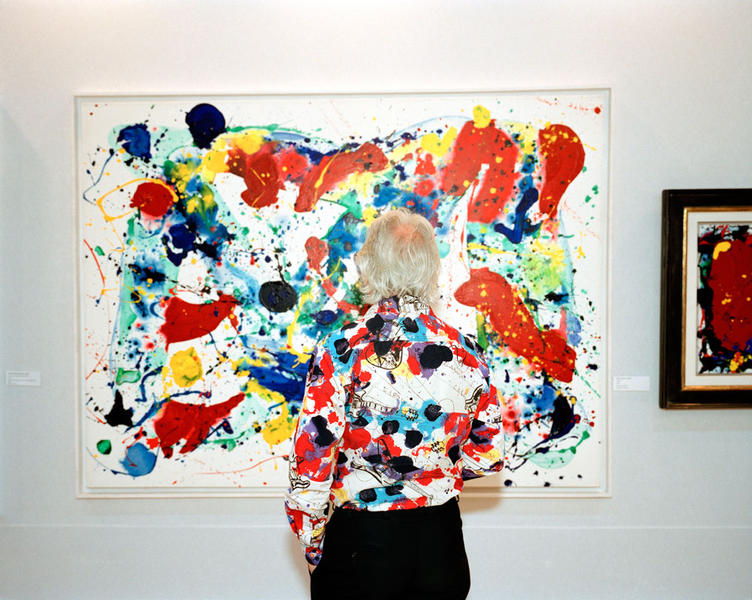 There’s nothing more tiresome than a photographer, writer or artist waiting for the muse to send its magical inspiration. Great work is made by putting yourself out in the world and hammering away at your shutter. And if you’re worried the majority of the images you take are bad? You’re not alone.

'Don't worry, most of the pictures I've taken are crap, too,' Parr said in 2016. 'You have to take a lot of bad pictures to get something good.' 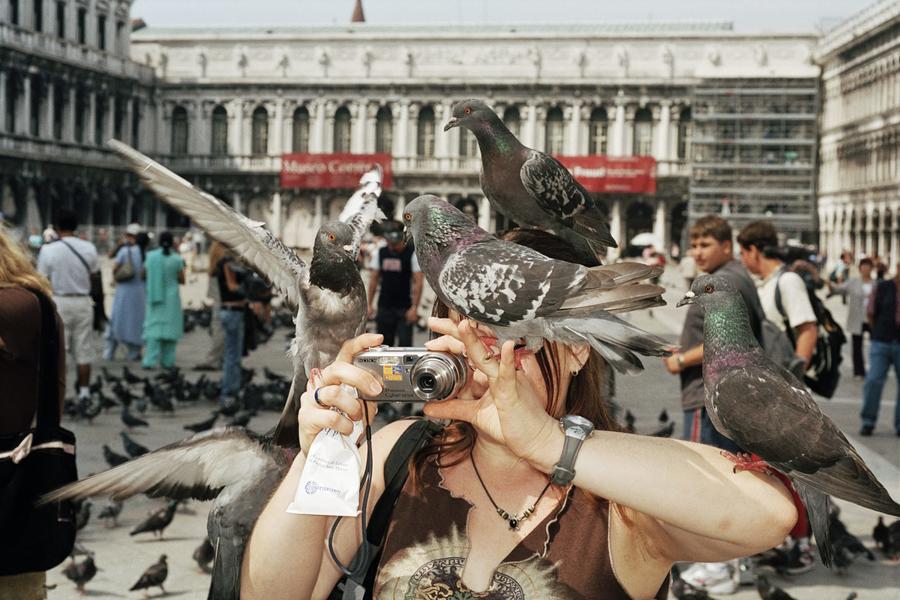 If you’re constantly on the move, it can get a little frustrating if you’re not quite hitting your mark every time. As well as shooting as much as possible, you’ll also need to fall back on that old virtue – patience.

‘I work very hard and very long hours, so if you’re out there long enough, you’re going to earn some luck,’ Parr told the publisher Phaidon. ‘That’s what some people don’t really appreciate: how much effort you have to invest in getting a decent set of photographs. On one level, photographing is very easy, and on another, it’s very hard.’ 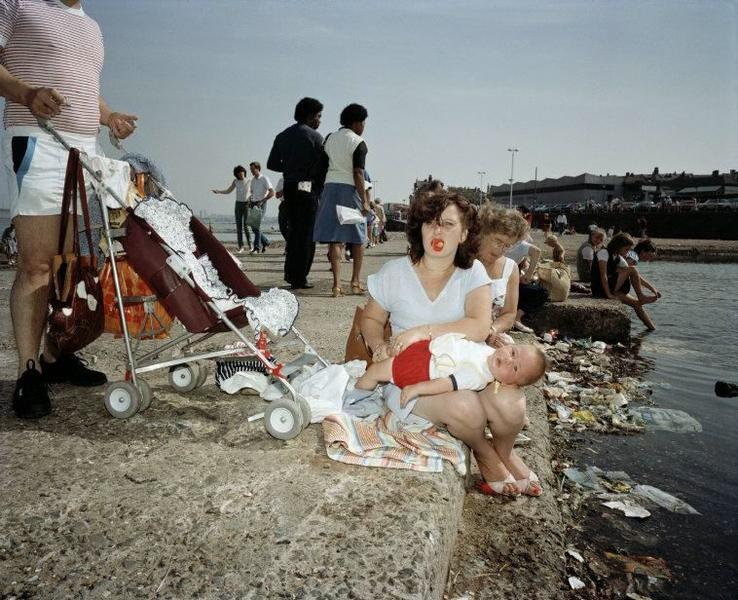 Back in 2006, Parr made the plunge into digital and has never looked back. He started off using a small digital Sony and soon upgraded to the Canon EOS 5D series. These days, he uses the Canon EOS 5DS R. And he chose Canon, quite simply, because he likes the ways the cameras feel in his hands.

Shooting digital means Parr is free from the worry of switching films and can instantly see the results of his work, a vital virtue when shooting as many frames as Parr does. 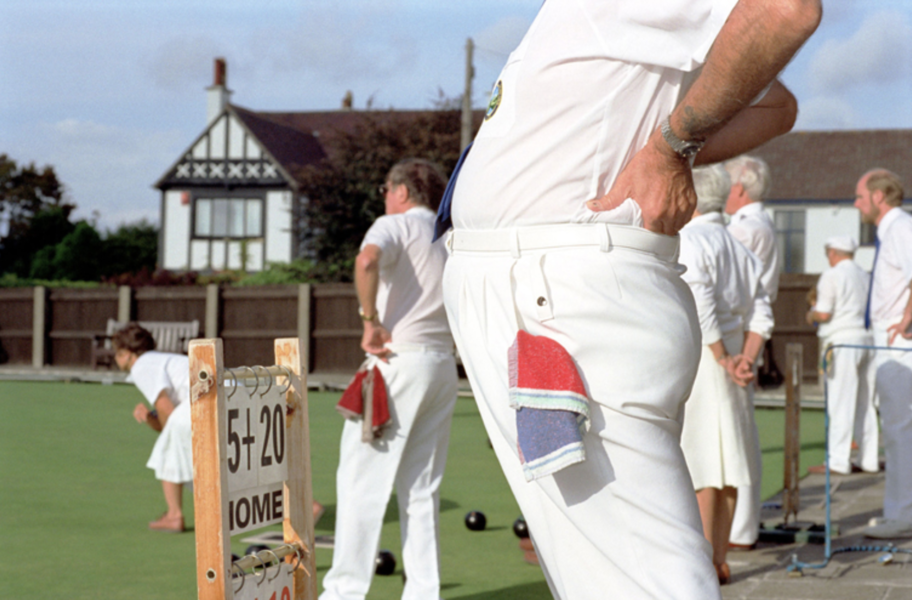 It may surprise you to hear, but Parr does not shoot using the manual mode of his Canon cameras. Instead, he uses the often-maligned Programme mode.

'I use Programme Mode all the time,' Parr said in 2017. 'If I'm shooting at night, I might go into [shutter priority] because I like the idea of what a slow shutter speed can do when using flash. But most of the time I'm just on Programme. Manual snobs really get up my nose because most of the time they've got to spend ages thinking about the aperture. I mean, why not take advantage of modern technology? Programme pretty much gets it right every time.' 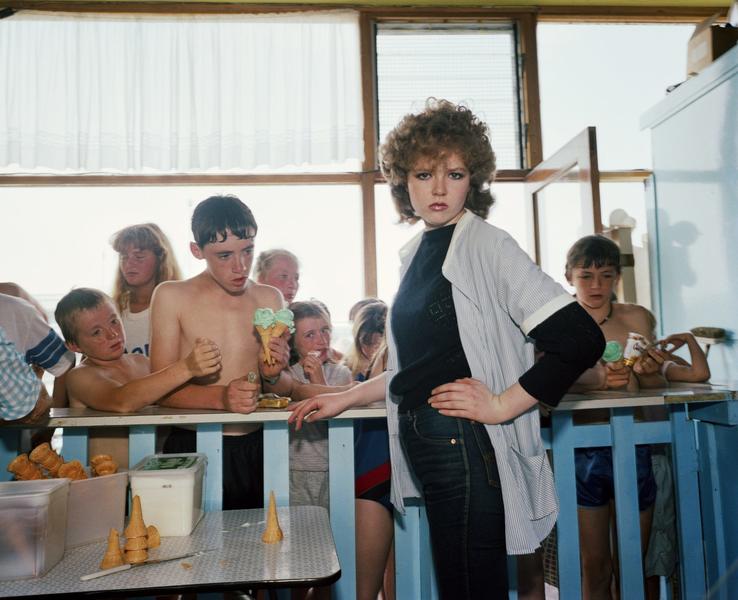 Use a wideangle lens

Talk to any street or documentary photographer and they are likely to tell you they favour wideangle lenses, usually a 50mm. However, Parr tends to go a little further and prefers a 35mm lens. The value of a wideangle lens is that it forces you to get close in to the scene and really engage with a subject. The angle of view also tends to be a closer approximation of how the human eye sees. 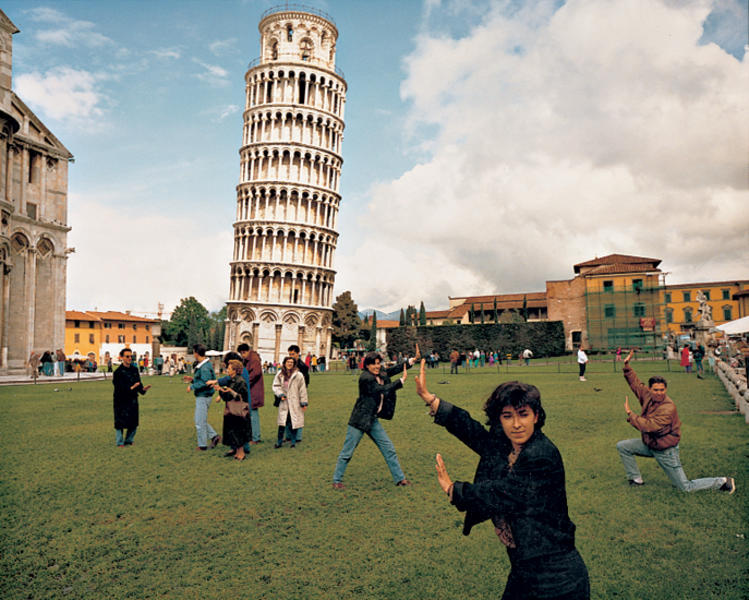 Parr is a photographer who tends to eschew Photoshop in favour of getting everything right in camera. And he will sometimes use flash to create high colour saturation. He often uses an SB29 ring flash, a studio light effect that in daylight gives the images their garish edge.

Parr also uses flash guns, in conjunction with a Gary Fong diffuser, in order to balance the ambient light with the intense burst of flash. Through these flash techniques, Parr is able to create pictures that feel vibrant and alive.

Parr also uses flash guns, which he uses in conjunction with a Gary Fong diffuser, in order to balance the ambient light with the intense burst of flash. Through these flash techniques, Parr is able to create pictures that feel utterly vibrant and alive. 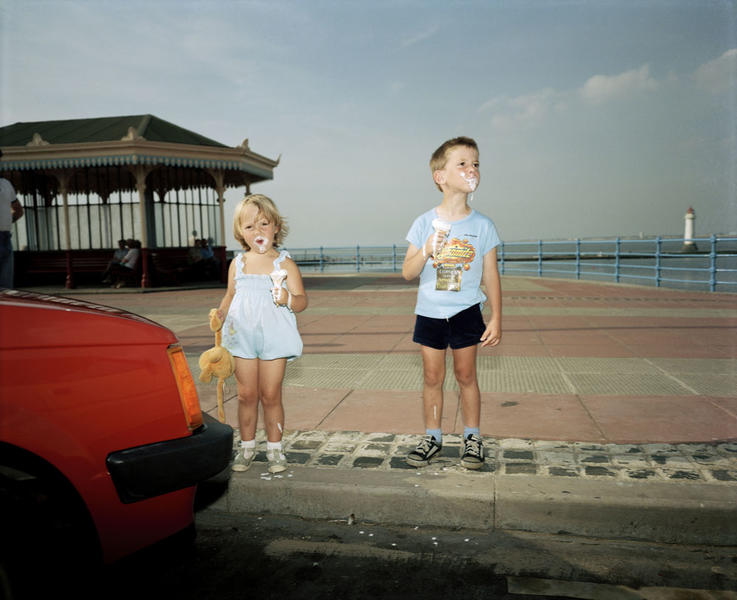 If you've been shooting a while it's easy to fall into the trap of feeling stagnant. The trick is to push your boundaries. Keep challenging yourself. One of the key things about Parr's work is that he always stays fresh by visiting new places and tackling new subjects, hence why he will in one project shoot Paris and in another focus on rhubarb growers. But those challenges can be more than about where you shoot - they can be technical.

'I'm currently exploring what's possible with a telephoto lens,' says Parr. 'The reason is that the telephoto lens in art and documentary photography is generally frowned upon. It's a lens used more by sports and news photographers. So, I've decided to explore the lens's possibilities in my own work.' 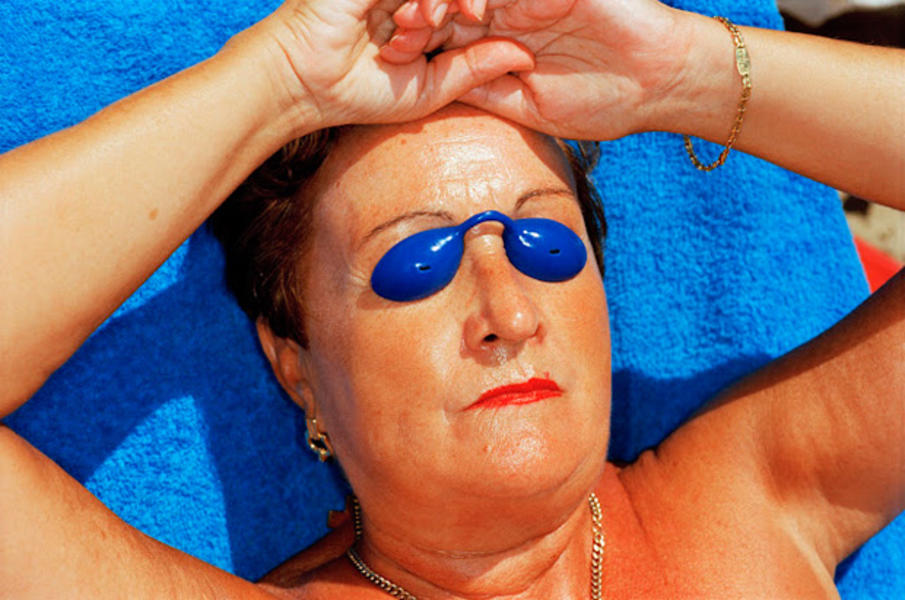 Think about why you're taking a particular image

Parr has often been accused of exploiting the subjects of his photographs. This is a matter of personal taste, though he has pointed out on more than one occasion that, in many ways, all photography featuring people contains some element of exploitation. Your moral compass will likely dictate when, where and what you choose to shoot. What's important is your intention.

Ask yourself why you're photographing a particular person. If the answer is to laugh at them, then you need to think seriously about putting your camera away and moving on. While humour definitely has its place in photography, mean-spiritedness does not. 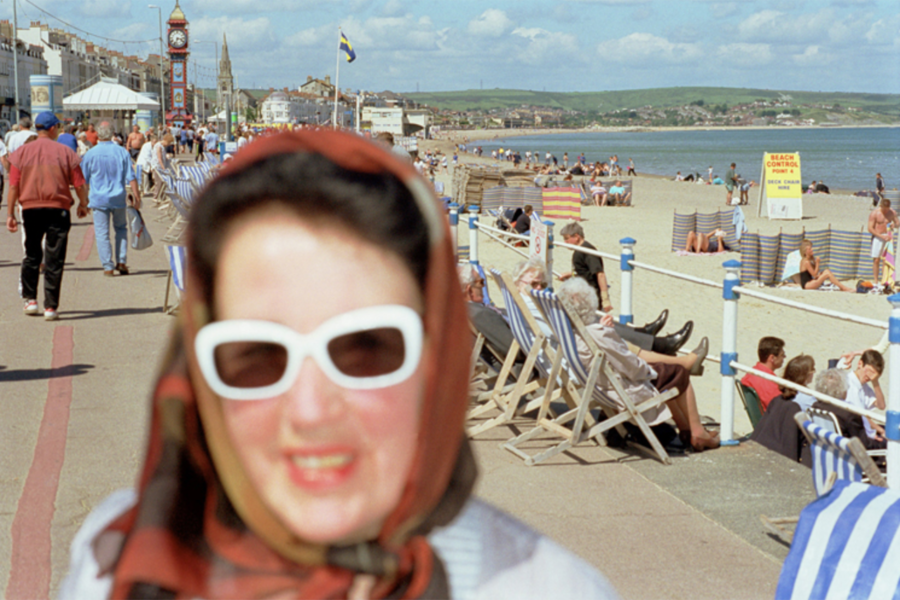