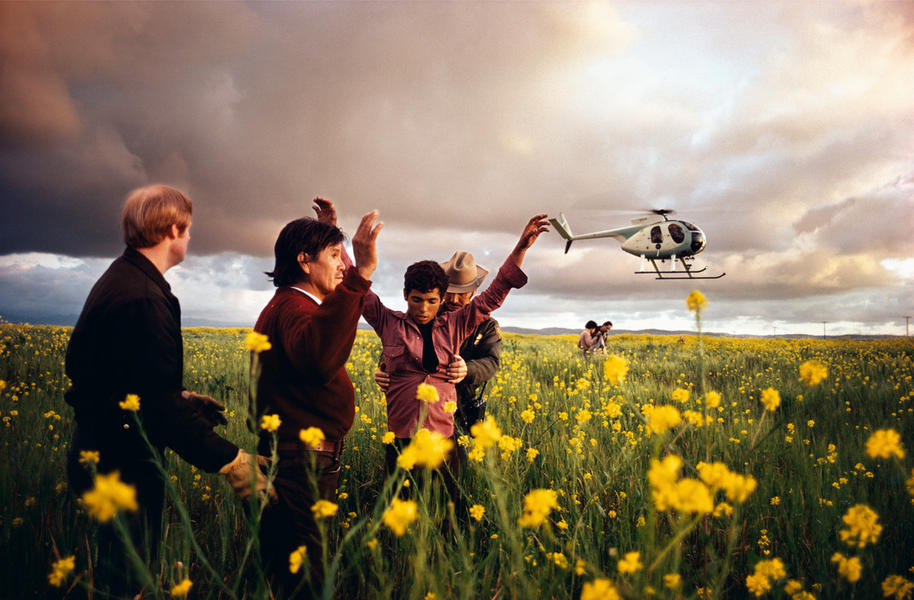 Colour is key to Webb's work. He often shoots in colour-saturated locations such as Havana, a city awash with the kind of tones that street photographers would give their left arm to shoot. But consider that colour exists everywhere. We live in a world of colour and it's there for the taking. It doesn't matter where you are.

One of the key lessons to take from Webb's work is repetition (see below). Notice in the shot here that the image is bordering on monochrome. The tones and colours work in harmony and give the scene an overall cool effect. This kind of colour effect can be found in all sorts of locations no matter where you are.

Take a look back at our Colour Street Photography Guide for an in-depth guide. 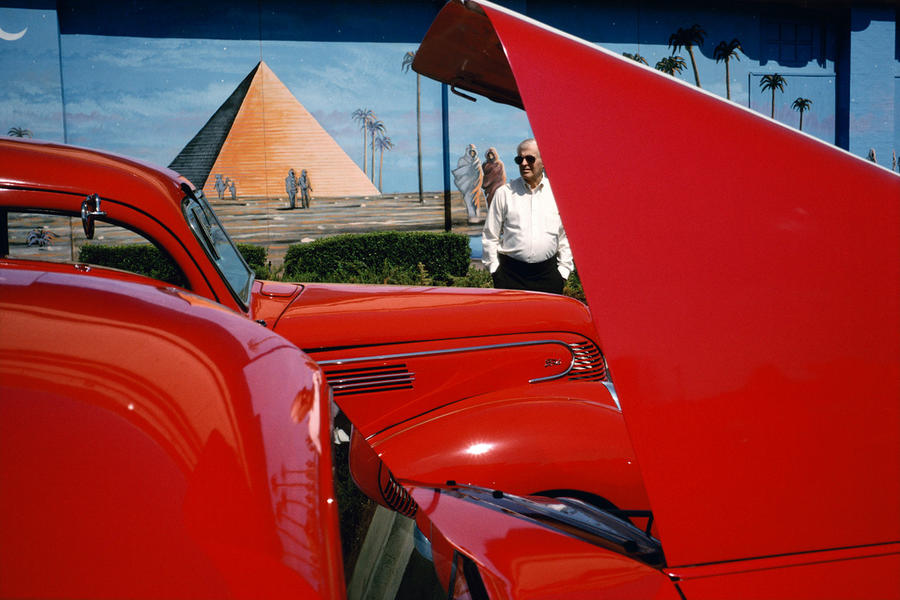 2. Seek out the light

Webb's confident handling of light should be a good lesson to everyone on how to make the best of natural illumination in street scenes. By shooting under strong sunlight, Webb is able to use the shadows and silhouettes to mask and highlight particular compositional elements, and also use the light to emphasise the vivid tones mentioned in the previous point. You'll note that on many occasions he's exposing for the highlights meaning that some areas of the scene are thrown into deep shadow. It's a great technique that lends the scene a three-dimensional effect. 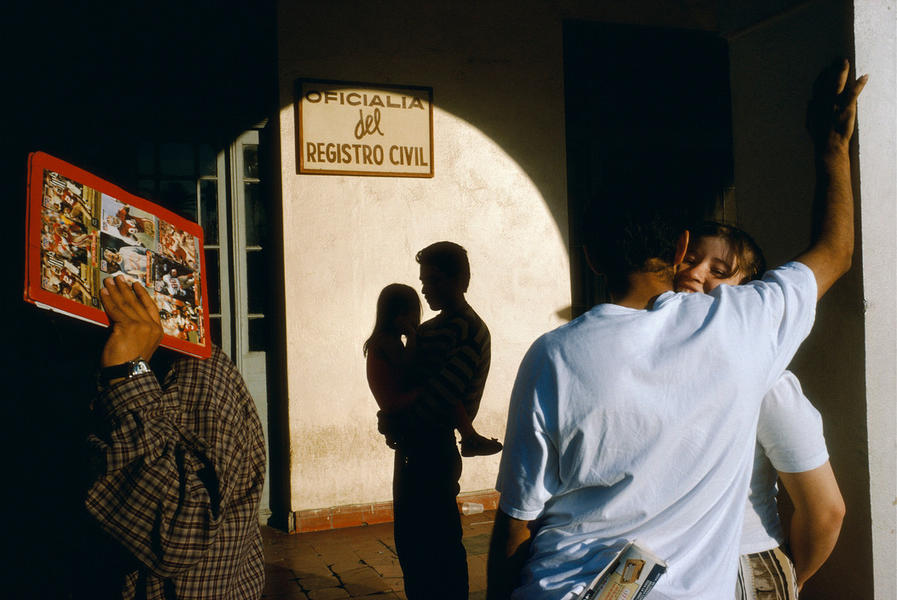 Alex Webb's images usually consist of several planes of focus and action. The foreground, middle-ground and background all contain their own points of focus. Webb understands how to carefully arrange each layer of the image in order to guide your eye from the front to the back. His 2001 image taken in Istanbul is a prime example of this. Our eye comfortably navigates its way from the silhouette in the foreground, to the walking figure in the middle and then to the seated figure at the back. This is all perfectly enclosed in the barber shop's mirror and the shop window. 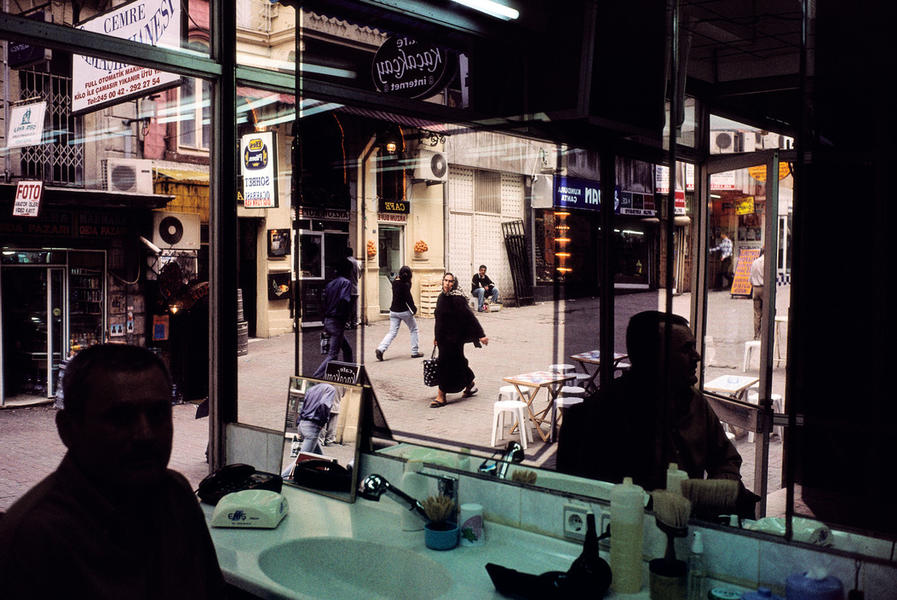 Working with layers requires the patience of a rock. Webb's images are often the result of hours of waiting at a single location. The trick is to find a location that you feel can offer you an effective image and then wait until one arranges itself. It may not happen on the first day or the second, but it will eventually come together in one magical moment. Landscape photographers will tell you something similar – locations often require you to visit them time and again. 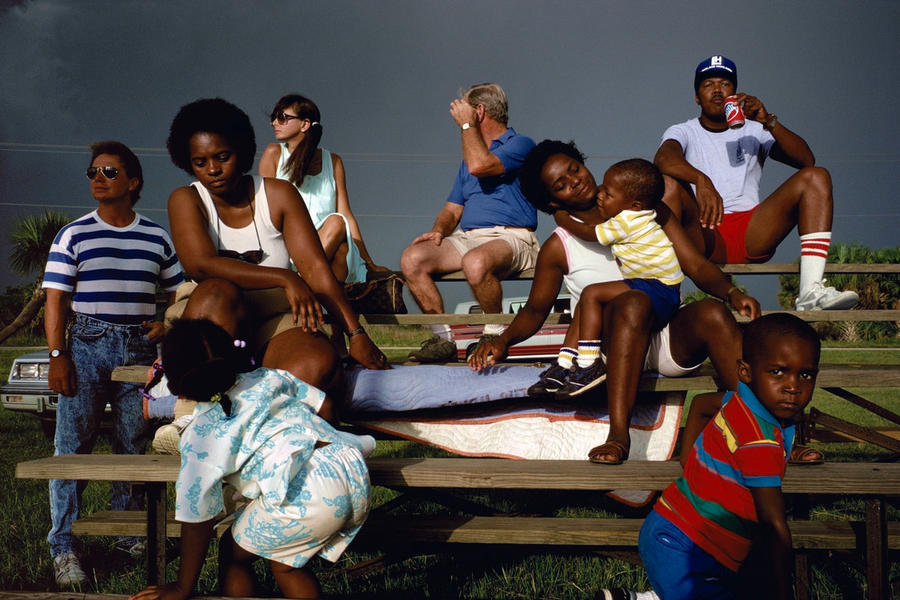 Another trick – and one common to street photography – is to shoot a scene that exhibits repetition. This can come in many forms, whether it's people, colour, pose or the synchronicity between shapes found throughout the scene. Often these elements go unnoticed until the second or third viewing yet they are there. Webb has worked for years to train his eye to pick up on these subtle repetitions and it's an instinct that can come to all of us if we get out there and put the hours in. 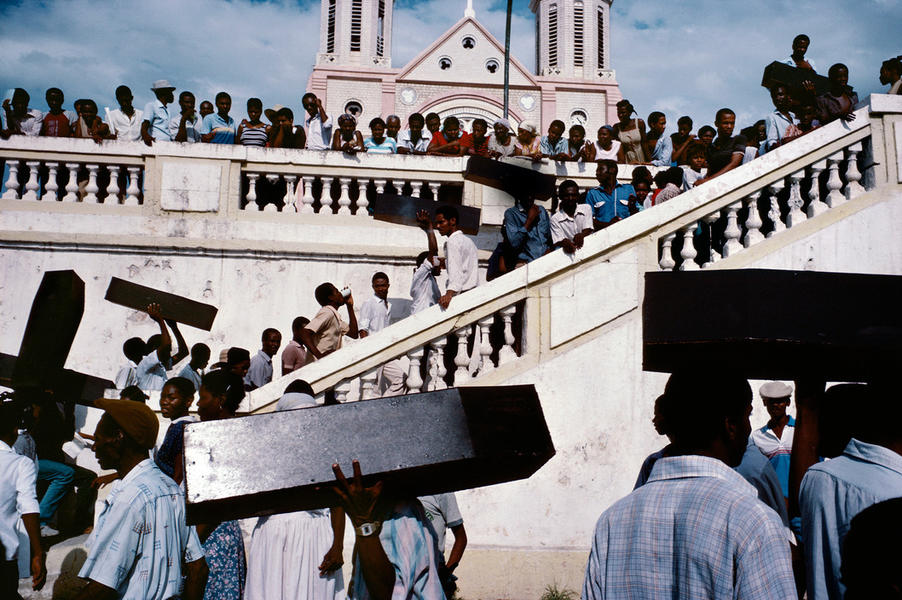 6. Don't be afraid to keep adding to the chaos

Webb's images are so full, photographer Dayanita Singh famously referred to them as ‘migraine photographs'. In the hands of a lesser photographer, these images would be overwhelming, yet such is Webb's careful handling of composition you never feel uncomfortable looking at them. They are certainly chaotic, but they are, in the words of photographer Eric Kim, ordered chaos.

Take a close look at Webb's images and you'll see that each and every element of the scene has room to breathe. Nothing feels cluttered, despite the busy nature of the frame. When elements are clustered together, they serve only to guide the eye with the simple use of leading lines. Webb has thought about and considered every piece of information of that frame. 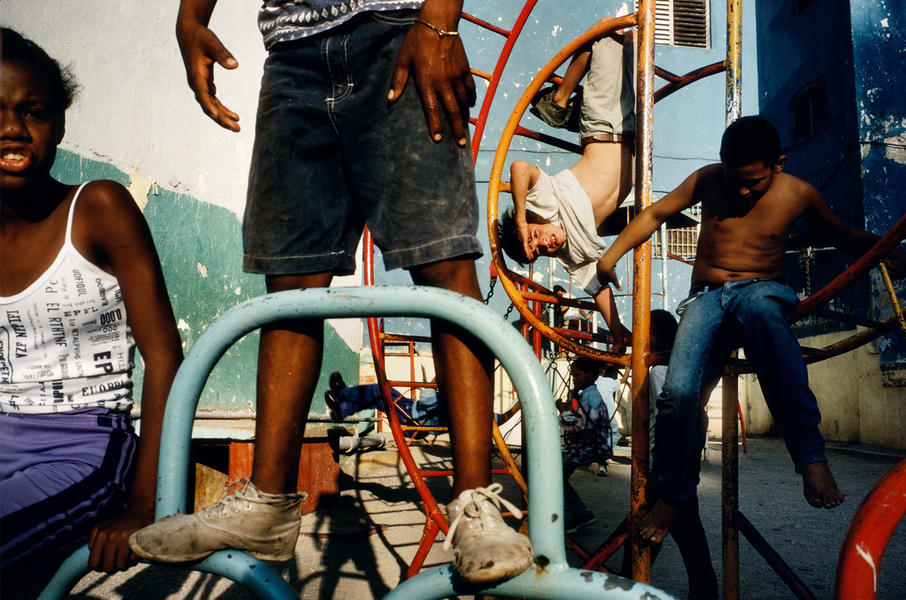 Webb's camera angles and composition are almost kinetic in nature. They suggest movement and momentum. Everyone in the scene is engaged in some sort of action, whether it's running, jumping or playing sport. The frames feel utterly alive. Nothing feels stationary and we are offered the illusion of life going about its business despite the fact we're looking at a static image. 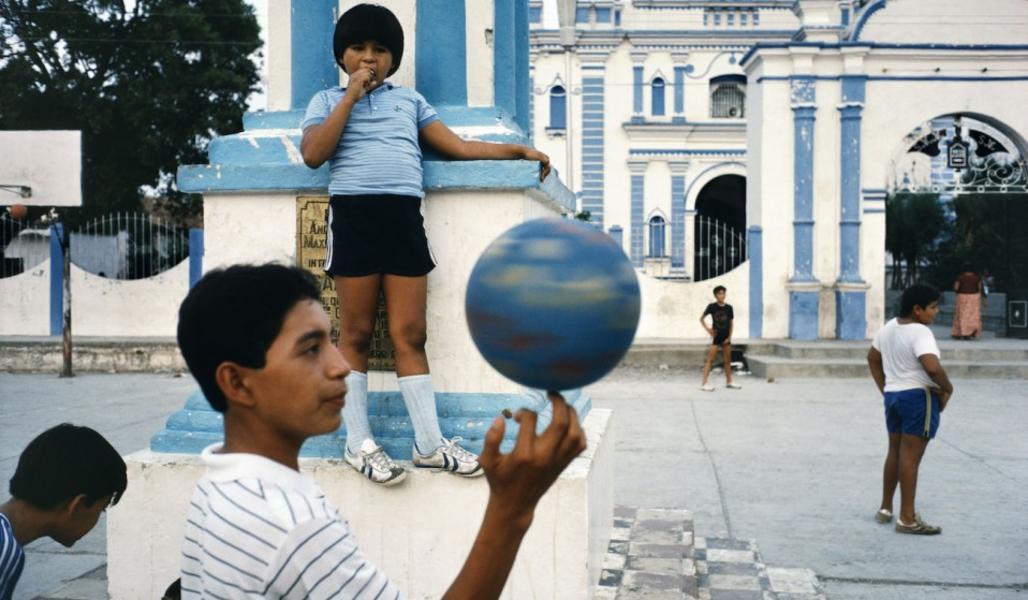 8. Persevere and learn to fail

It can be easy to imagine that Webb picks up his camera in the morning, goes out for a few hours and then returns with several winning shots. Webb will be the first to tell you that this has simply never happened. Webb's output is certainly impressive but it's a body of work born from years of failure. As with any photographer, Webb gets perhaps one good image out of a hundred. The key is to keep on and be patient. Always remember the famous quote from writer Samuel Beckett: ‘Ever tried. Ever failed. No matter. Try again. Fail again. Fail better.' It's a quote every photographer should live by. 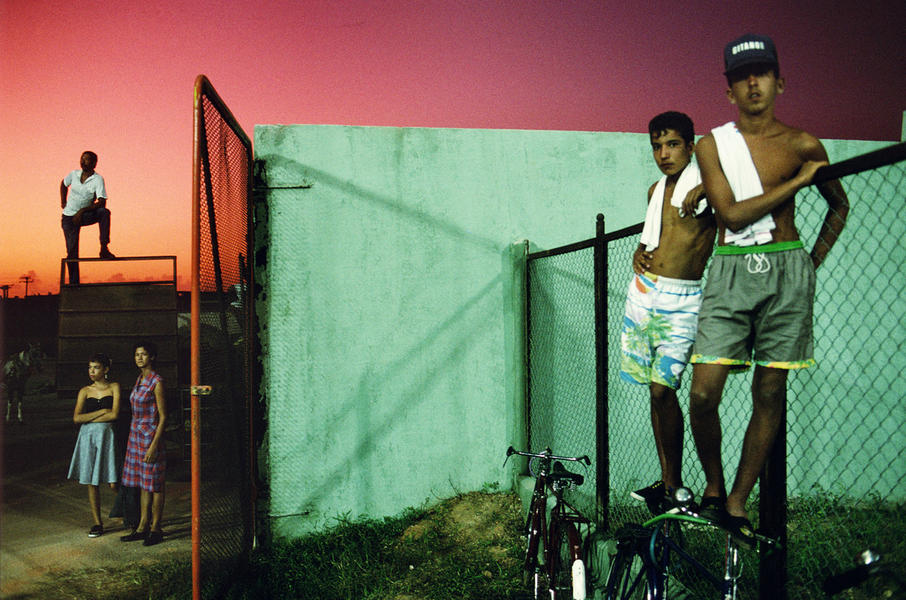 9. Stay on your feet

Webb has spent years on his feet. If you're really serious, dedicate yourself to getting out with your camera for at least an hour a day. You could do this before or after work or even during your lunch hour.

Walking is one of the best ways to embrace a location. Walking puts you in touch with landscapes both urban and natural. It slows you down and demands you notice your surroundings. Just make sure you wear a comfortable pair of shoes. 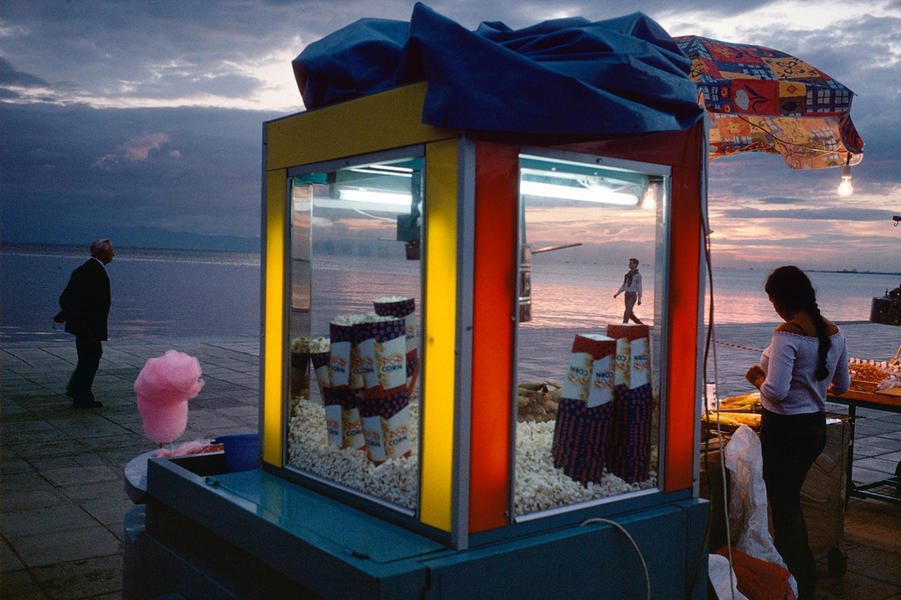 Photography will not come to you. You have to seek it out. But you don't have to jump on a plane and travel to faraway lands to achieve street shots with impact – your own town, village or city will provide you with plenty of opportunities for incredible street shots. The fact that Webb's images are taken in other countries is entirely incidental. Right outside your door, there is a world of composition, light and colour. 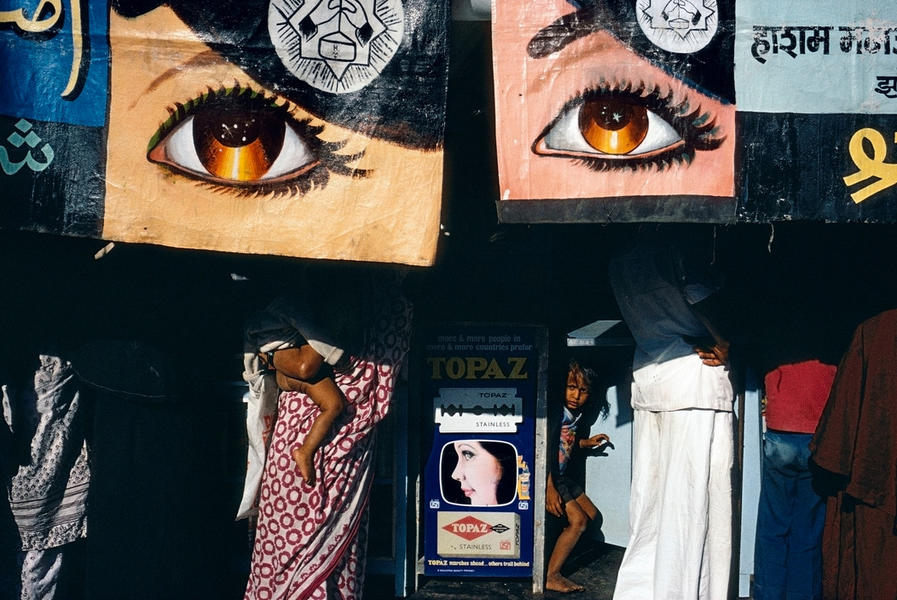 Any thoughts on Alex Webb's work? Let us know in the comments below.