Behind the lens: Wedding Bells

Behind the lens: Wedding Bells by Anna F. Walker 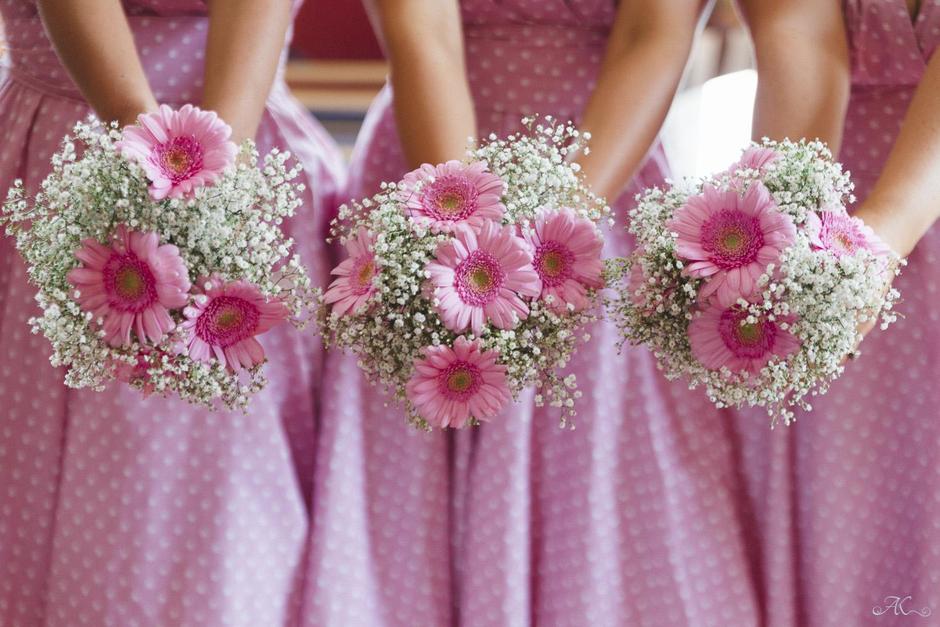 Recent Photocrowd winners share stories behind their winning images, and love is in the air as we have some stunning wedding shots for you and an ingenious idea for a wedding invitation.

I took this photograph at a wedding in July this year in Kinnitty Castle, Ireland. It was taken in the bride’s getting-ready room in the morning. I had already taken lots of shots of all four girls together - the bride and her three bridesmaids with their bouquets. Just as we were about to leave for the ceremony, the bride was having some last minute touch ups to her make-up and the bridesmaids were standing in a line beside me waiting for her. I noticed a lovely simple symmetry about the three bridesmaids in matching polka dot dresses holding perfectly coordinated bouquets (the baby’s breath flowers even had a polka dot look!).

I had a 24-70mm lens on my Canon 5Diii at the time. I asked the girls to stand in a straight line facing me and hold the flowers out in front of them as far as was comfortable, because I wanted to get some foreground/background separation. I wanted the flowers to be the focus of the shot, with the dresses as a backdrop. I set the lens to 70mm and aperture wide open to F2.8, focusing on the flowers.

The shot didn’t need too much post-processing - I had composed and cropped in-camera. I always meant it to be a detail shot of the flowers against the dresses, so I had chosen to leave out the girls’ faces just for this one. I shot RAW, so I did some RAW processing and fine-tuning in Lightroom. I kept the processing quite natural - the colours were lovely as they were, so mostly I just needed to add a little contrast and punch to the RAW file. 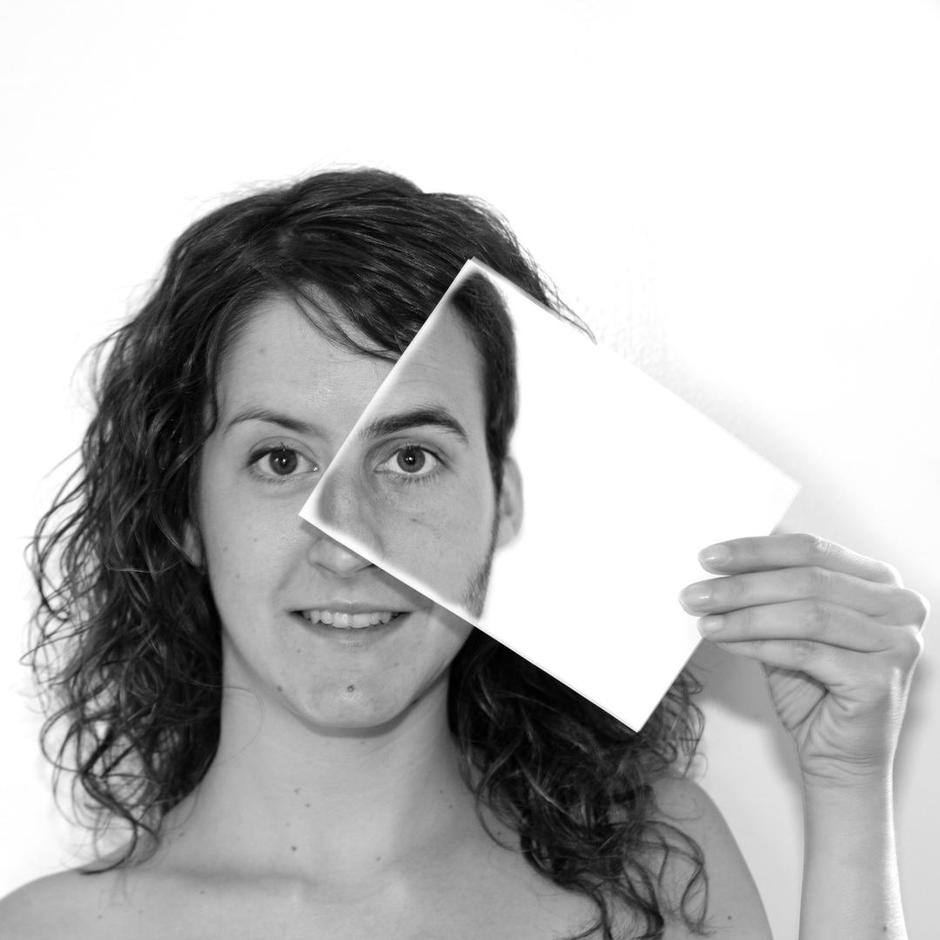 There were several motivations behind this picture. We were preparing for our wedding with my - at the time future - wife and wanted to have some personal and original details for our invitations and gifts. I used this as an opportunity to get into a new challenge. I like to explore the infinite possibilities that digital photography offers, but I am no expert in portrait photography or in image editing (although I've got the bases covered).

I set up a basic photo shoot (e.g. a simple white door as a background) in our apartment to have both our portraits taken. I photographed either a proper full head shot, or partially covered with a piece of paper. Part of the credit has to go to my wife as she took my portrait, and had to deal with the very bad model that I am.

I first processed the pictures with Lightroom to convert them into black and white, crop, adjust contrasts etc. I then used Photoshop to assemble different pictures into a final portrait and did some editing. The manipulation is not extremely difficult if you carefully planned the initial photo shoot (e.g. all pictures have to be taken with similar lighting and angle).

As a result, I came out with a series of imbricated portraits and this one really stuck out. The two faces really matched (the fact that we have similarly shaped faces surely helped) and created a picture that was both appealing and confusing. At first it is not clear that two different persons actually form this portrait, and I think this is the main strength of the image. 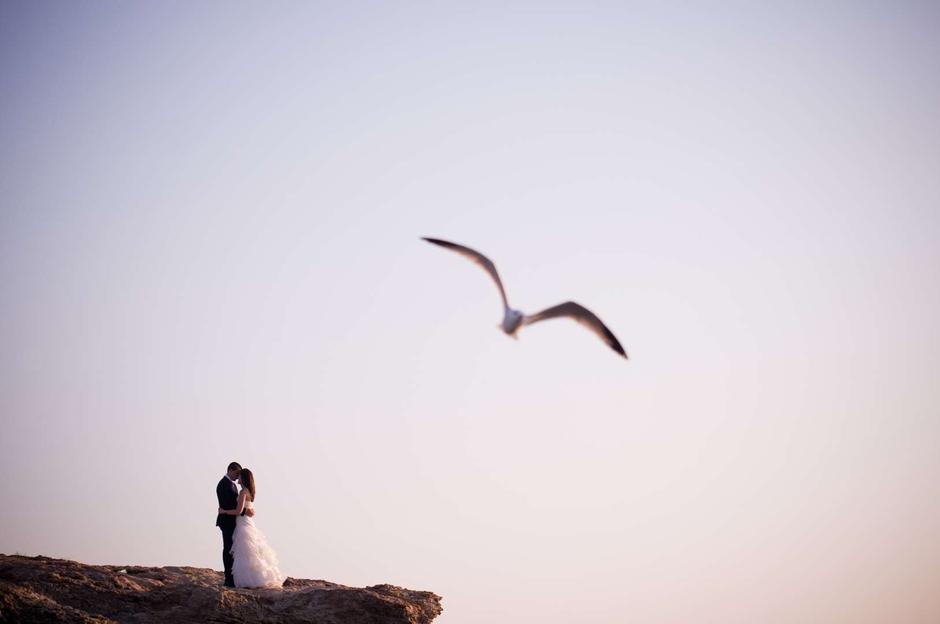 The picture was taken during a "trash the dress session", which is a photo shoot after a wedding, when the couple is already married and the nerves are gone. I like to work in this kind of environment - just the couple and myself, without any timetable or pressure.

The location is Ibiza, a rocky landscape close to San Antonio Bay, on the west coast of the island, where you can see the sunset on the sea.

I was on the ground with my telephoto lens Sigma 70-200 2.8 on, and I tried different compositions. Actually, you can’t see it on the picture, but the sea is just a few meters below the couple. So I framed them with and without the sea, using the sky and the sea, or just the sky and the rock.

By the time this picture was taken it was almost sunset. During this time there is always someone paragliding around the bay, and often you can see seagulls too. I had already taken some pictures trying to play with those extra elements. The seagulls were coming towards me and the frame over and over. So I shot many times, but keeping the focus on the couple.

When I got home and was post-processing the pictures, I realised that there probably was a good picture in there among another 500 photos, which is the number I usually take in a three-hour photo shoot.

There isn't a lot to say about the editing part - I added the lens vignetting and used a purple tone for the image. The best part of this picture, in my opinion, is the composition.