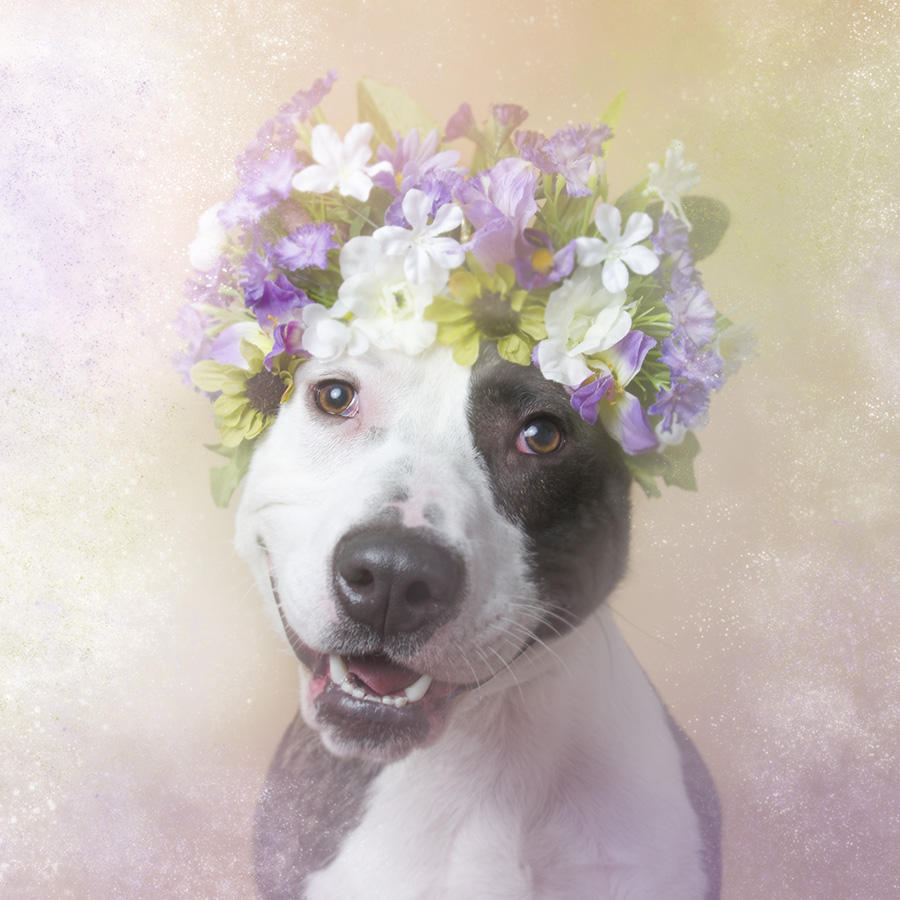 2014 has been quite a year for pet photographer Sophie Gamand: her Wet Dog series went viral and later won her one of the most prestigious awards in the industry - the Sony World Photography Awards. In this interview Sophie talks to us about her amazing year, how it has affected her life and work, and what comes next.

How has your professional life changed since winning the Sony Awards?

Things were already on the move before the Sony Awards - I had signed a book deal and gained a lot of international attention in the media. I would say the award brought my work into the world of fine-art photography. I gained even more exposure than I had before, and people from the industry started taking my work more seriously. An award like this definitively puts you on the map. I was no longer just a pet photographer, I became a fine-art photographer.

The fact that I won the Portraiture category, a category primarily designed for human photography, validated my entire photographic exploration. It did not really change my professional life (I am not suddenly richer!) but on a personal level I definitively feel more confident in my art. It gave me the recognition and the push I needed to really believe in myself. 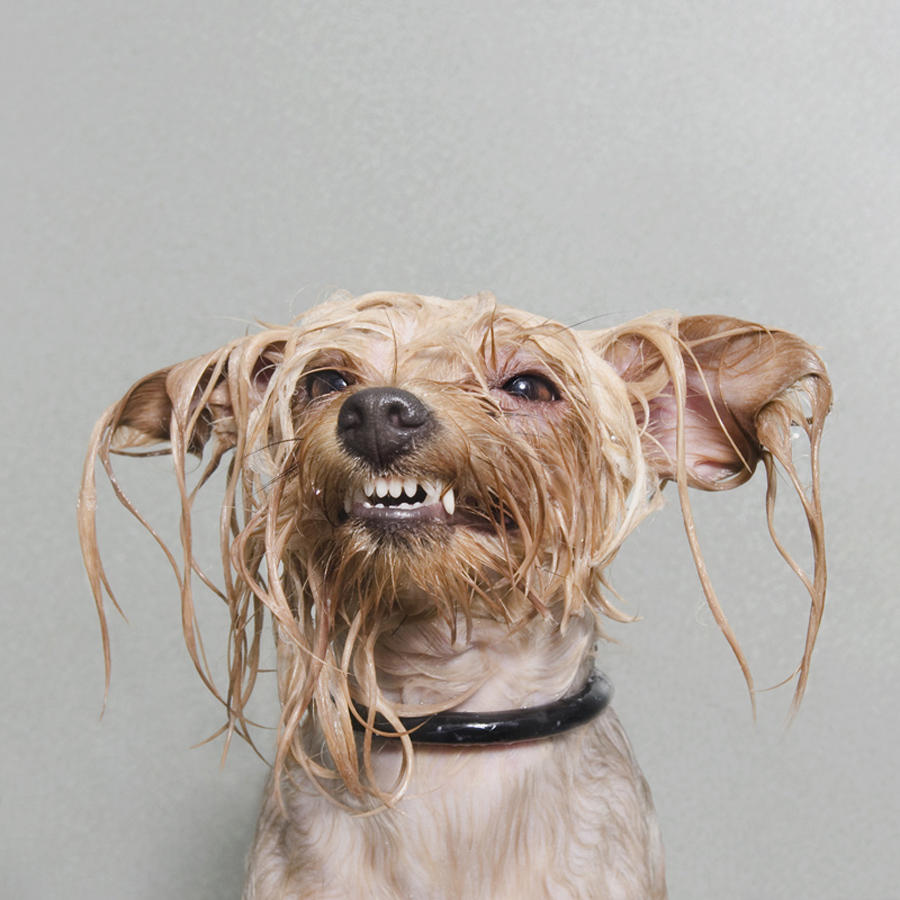 What happens when you get nominated?

Being nominated is the most exhilarating thing! I never thought I would be short-listed for the award, let alone win it. The whole experience was amazing. And the World Photography Organization team (the people that organise the awards) is amazing and very supportive. It has been an incredible journey with them. 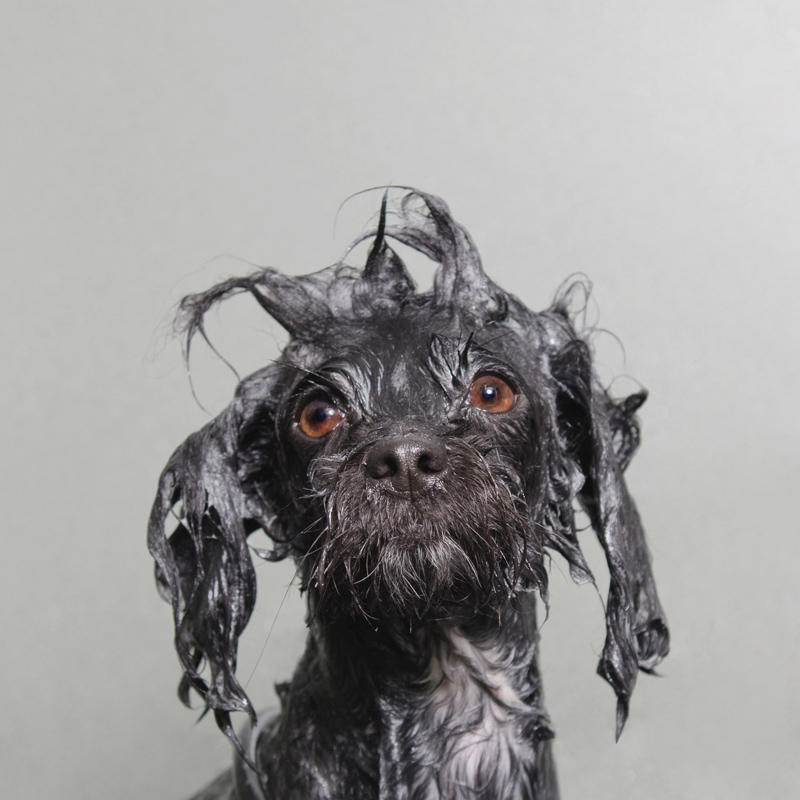 What happens after you win the award? Is it the case of your phone constantly ringing?

After winning the award I had to give a lot of interviews. The press bureau of the Sony Awards does a great job though, and they took care of many media requests. I was still answering questions almost every day, from journalists from all over the world. There were lots of other requests, too (companies want to use your images for this or that, people want to hire you, etc). It can be quite overwhelming because everyone wants something from you, and they want it yesterday.

But winning an award does not mean you have arrived. There is still a lot of work to be done, contacts to be created and fostered. Since I first went viral in November 2013 with the Wet Dog series, I have not stopped looking for opportunities, networking, etc. Managing the wave is a full time job. 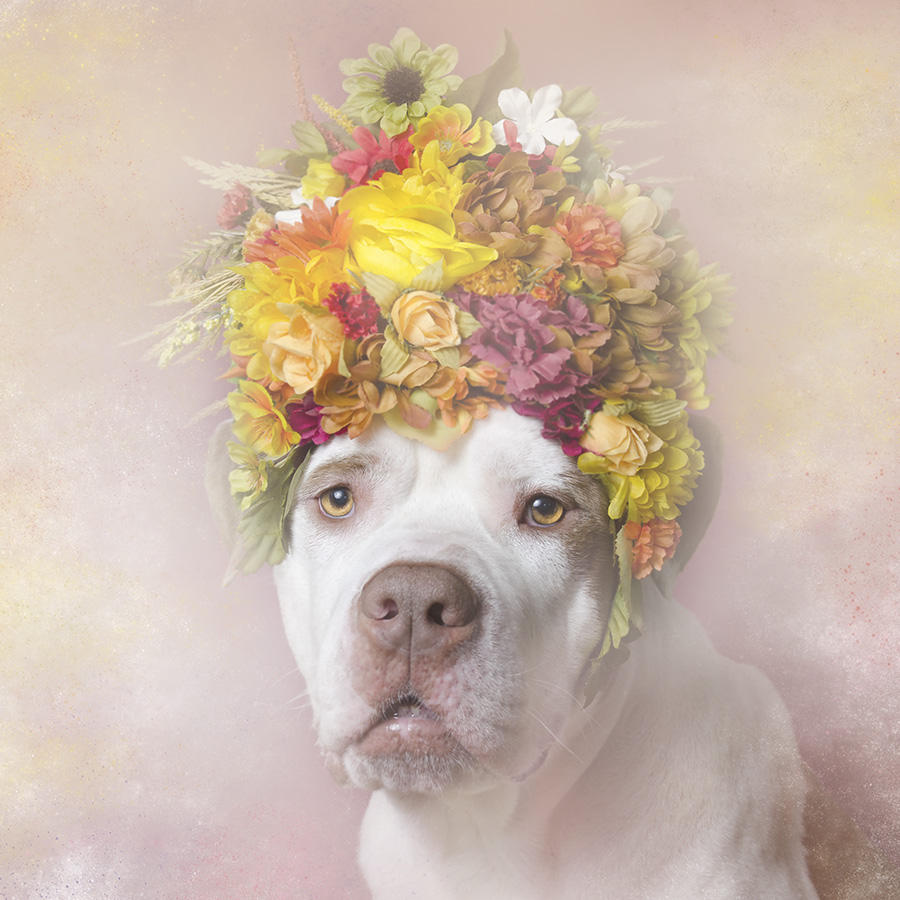 Did you get an agent after winning the award?

I already had a literary agent (for book deals). I was hoping to find a commercial agent so I could start getting more editorial work, but nothing happened. It’s fine because I believe everything comes when you are ready for it. I am still working on some opportunities that have arisen since November 2013. I could barely keep up with all the opportunities that came my way. It has been a huge learning curve. I know so much more today than I knew a year ago! 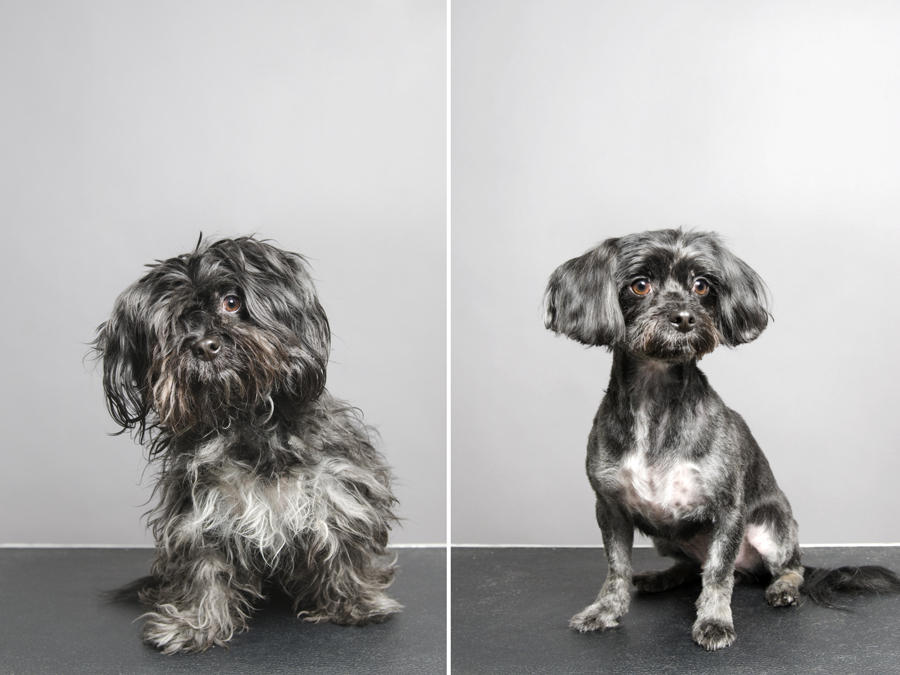 Do you feel more pressure now?

Not at all, if anything I feel like there are more possibilities! I finally found an audience for my work. It is such a great feeling to feel like people want to see your work and appreciate it. I always think about the next project so the pressure was always there. The awards did not change anything. I sometimes wonder what the next step should be, but I don’t think I could really force it. My entire life I have trusted that the universe would provide, whenever it would be meant to happen. As an artist all you can do is work hard, push yourself, and let the magic happen. In my case, the Wet Dog adventure certainly confirms that. 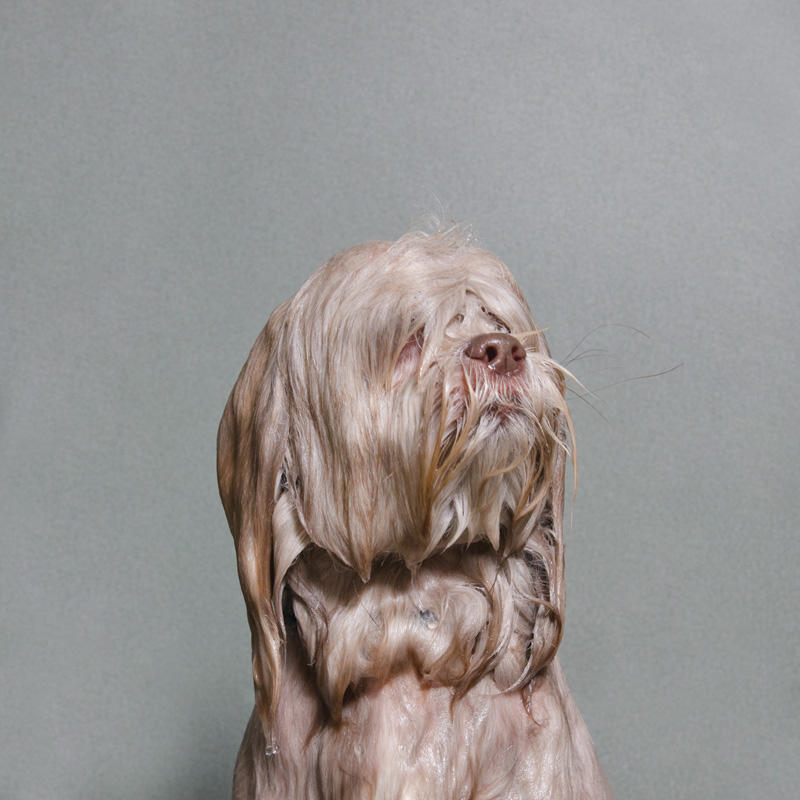 What sparked the idea behind the Wet Dogs project?

I had been photographing dogs for three years but most of my art projects were very demanding. My previous studio series, Dog Vogue, had taken me over a year to complete and I had spent over a year on a documentary, my Dead Dog Beach series, as well. I wanted to go back to something more spontaneous. I knew I wanted to photograph the grooming process but never thought of doing a series of wet portraits until it happened in front of my camera! That day was very special because I let go of something in my artistic practice. I gave up control and I was rewarded by my most successful series to date. 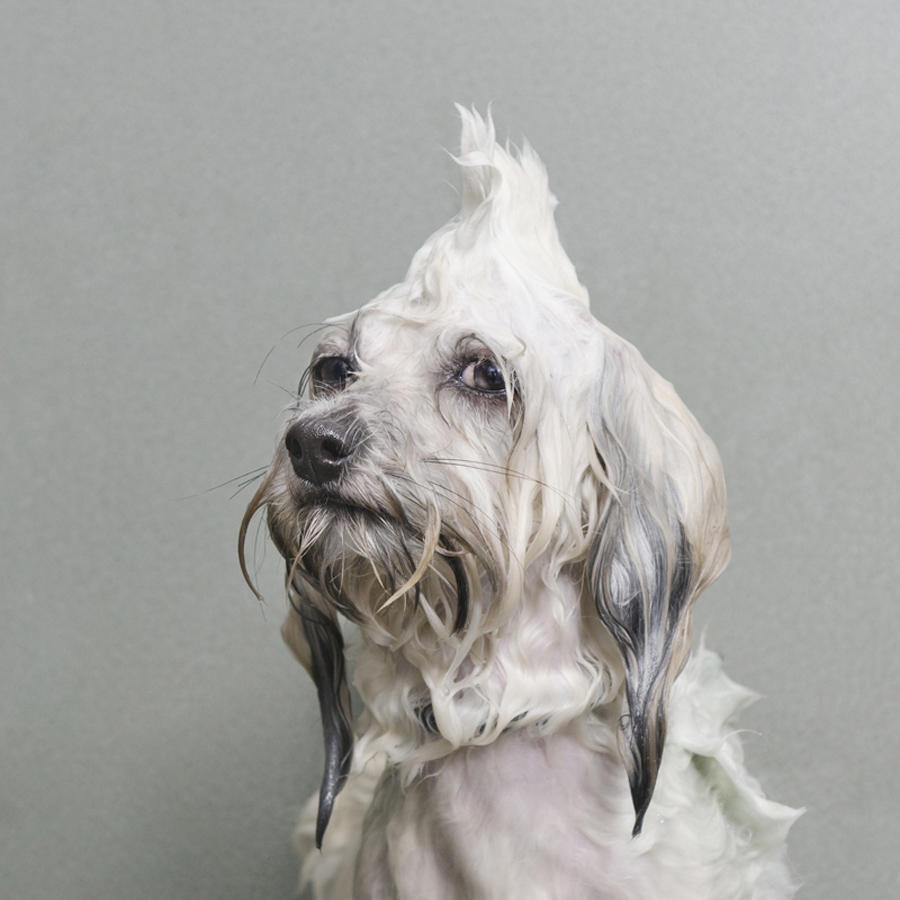 Although I love all of them (otherwise they would not have made the cut!), I would say Oscar, the white dog with the mohican and serious face, could be considered my favourite because it was the first one I took. There is so much depth in his expression, some sadness too. That image made me realise the potential the series had. These portraits are not just soaked dogs. In my mind, they also question the relationship we have with dogs. They have agreed to live with us, abiding to many rules, and bath time is one of them. They hate it but they accept it. It speaks volumes about the kind of relationship we have with them. 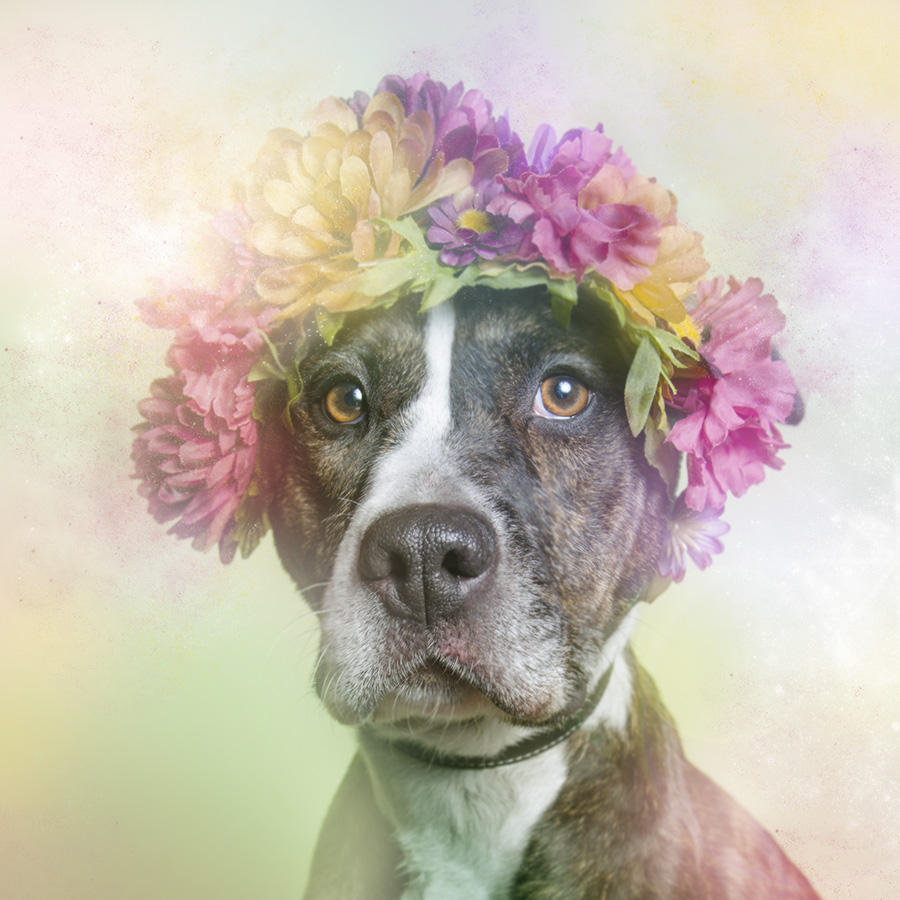 Your Wet Dogs project was followed by your Flower Power project. Could you tell us about that?

While working on my Wet Dog book this summer (scheduled for Fall 2015 but I already shot all the images), I wanted to work on a side project, something fun and small, and do something good for shelter dogs. I had been wanting to photograph pit bulls for some time, to get to know them better. I admit I had prejudices against them, but I always bumped into them at the shelter. So I thought that challenging myself to work on a project with them would be a great way to overcome my apprehension. One night I had the idea of putting flowers on their heads. I wanted to photograph them in the softest way possible, the complete opposite to how they are always portrayed. Flowers seemed the way to go.

I had no idea it if would work and I was certain keeping the flowers on their head was going to be a challenge. I went to Sean Casey Animal Rescue in Brooklyn, with a suitcase of flower crowns I had made. The guys at the shelter looked at me as if I was crazy, but they let me do my thing. The shoot went extremely well, better than I had hoped for. Then it took me a few days to decide what kind of post processing I wanted to do on the images. I wanted a painterly effect, something borderline kitsch. 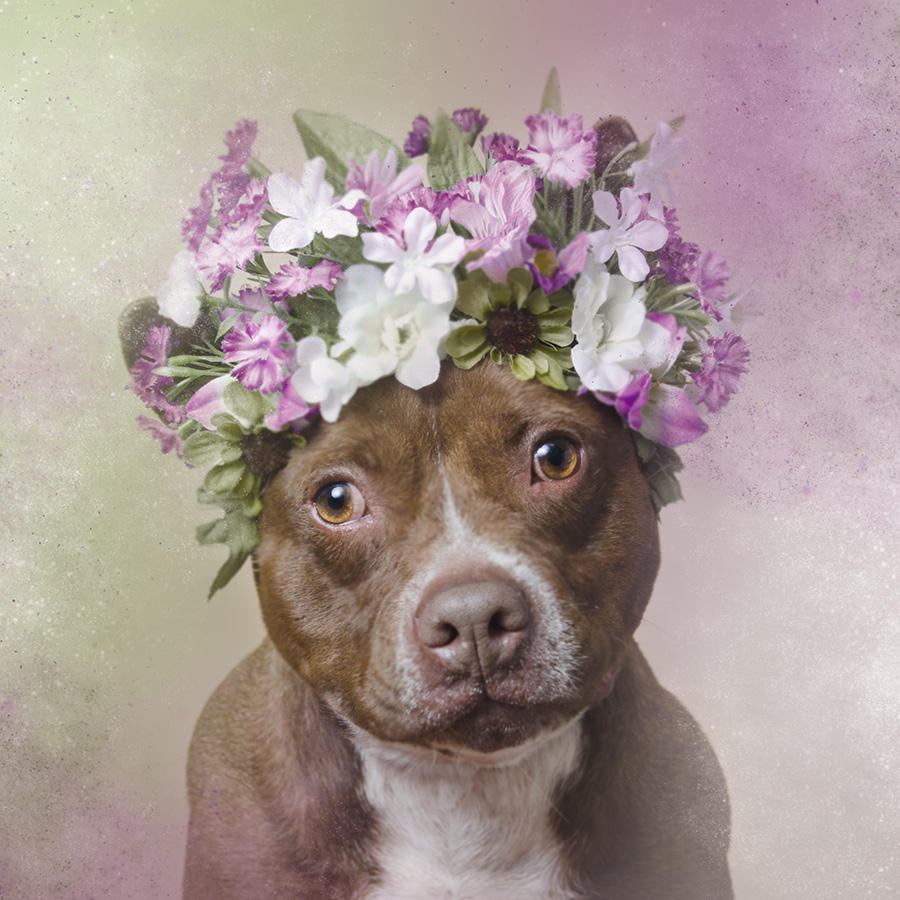 I released the images very quickly because the shelters needed a push in the adoption process. Coincidentally it was Pit Bulls Week on the Huffington Post so the timing was great! They published the project, and other blogs and websites did too. Suddenly, I was going viral again! Now I am working on more of these images. I have released a 2015 Flower Power calendar with proceeds benefiting the rescues and the project and I have also launched a #PitBullFlowerPower social media campaign to raise awareness for pit bulls.

America is faced with a deep pit bull crisis and photography is a great tool to address it. America euthanises upwards of one million pit bulls every year. Most of them are great dogs who are judged by their looks and completely misunderstood by the general population. Their individual temperament is not taken into account. I am hoping that by modifying the way we look at them, I can bring attention to their plight and slowly change people’s perception of these animals. Photography is a gentle way to start making change. 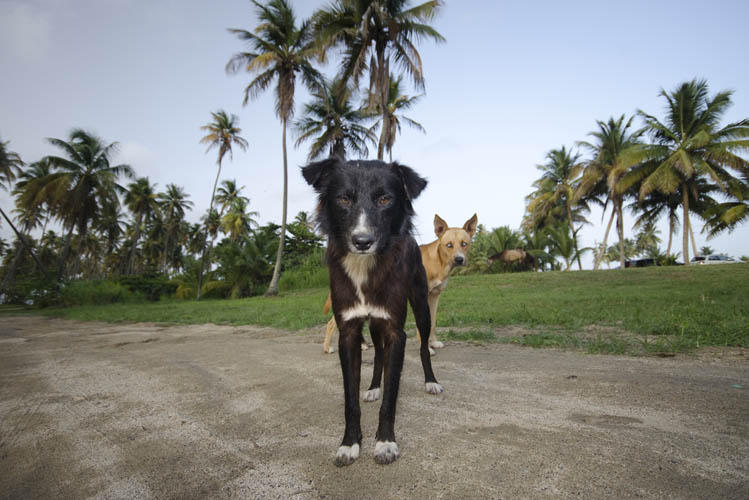 What do you try to achieve with your pet photography? Do you have a mission? Is there a central theme running through all your projects?

Absolutely. My entire work is dedicated to exploring the contemporary relationship between dogs and people. I believe that by observing dogs and the things we do with them, I can better understand people. Every project, whether it is a series of studio portraits or a documentary I shot on the field, brings me closer to understanding humanity better. When I see how people interact with dogs, I witness people’s social challenges, fears and inadequacies. Working with dogs has made me a more compassionate person towards people, actually. 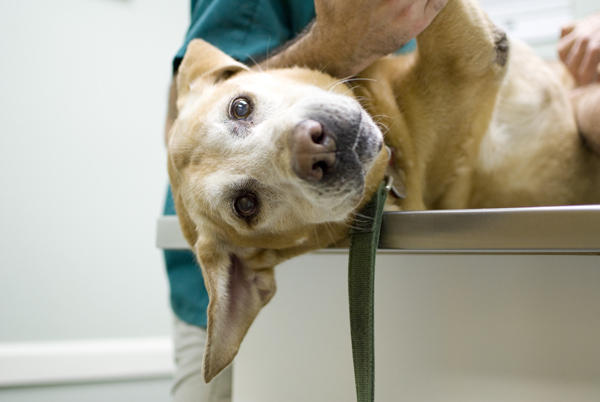 At the Vet series © Sophie Gamand

What is the next Sophie Gamand project?

I have a couple of new fine-art series coming out soon. The next one will most probably come out in October/November. It is a gallery of portraits of hairless dogs. On the documentary side, I am working on a couple of small stories celebrating people and their dogs (especially therapy dogs). I am also planning more trips, possibly to Puerto Rico and other countries and islands, to document populations of stray dogs around the globe and how local residents deal with them. I am hoping to find some corporate support/funding for this project. 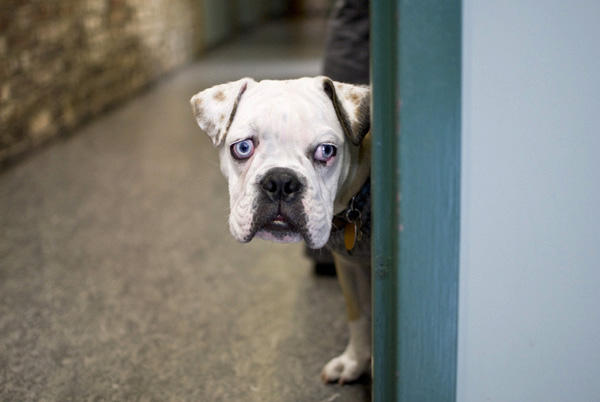 At the Vet series © Sophie Gamand

Are there other pet photographers that inspire or influence you? If not, who or what does?

At the moment, my inspiration comes from within because I have tons of ideas I want to explore. I never feel the need to look at other photographers’ work. But of course the creative process is constantly evolving and changing, and things I have seen or heard in the past most certainly influence my work today. I have no rule other than following the flow, trusting my creative voice and seeing where it takes me. It has been the toughest lesson to learn, as a growing artist. Now I am very confident and trust my creative voice more and more.

In 2014 Sophie also served as an expert judge in our Pet portraits contest - make sure to check out her Top 10 images and excellent reviews here.