Vivian Maier is perhaps one of the greatest posthumous photographers we've ever seen. We take a look at what makes her images so significant

During her lifetime, Vivian Maier took around 150,000 images but not one of these images was seen by the public until 2007. Two years before her death, Maier failed to keep up payments on a Chicago storage space and her countless boxes were seized and then auctioned.

It wasn’t until John Maloof, a collector working on a history of his local suburb, bought the boxes of negatives and then published them on Flickr. By then, Maier had passed away but her images went viral almost overnight. Maier had worked as a nanny for around forty years, but during this time she had stalked the walkways of Chicago, New York and Los Angeles capturing images that years later would be seen as some of the greatest examples of street photography we have ever seen. It’s an incredible story and one from which we can glean some vital lessons. 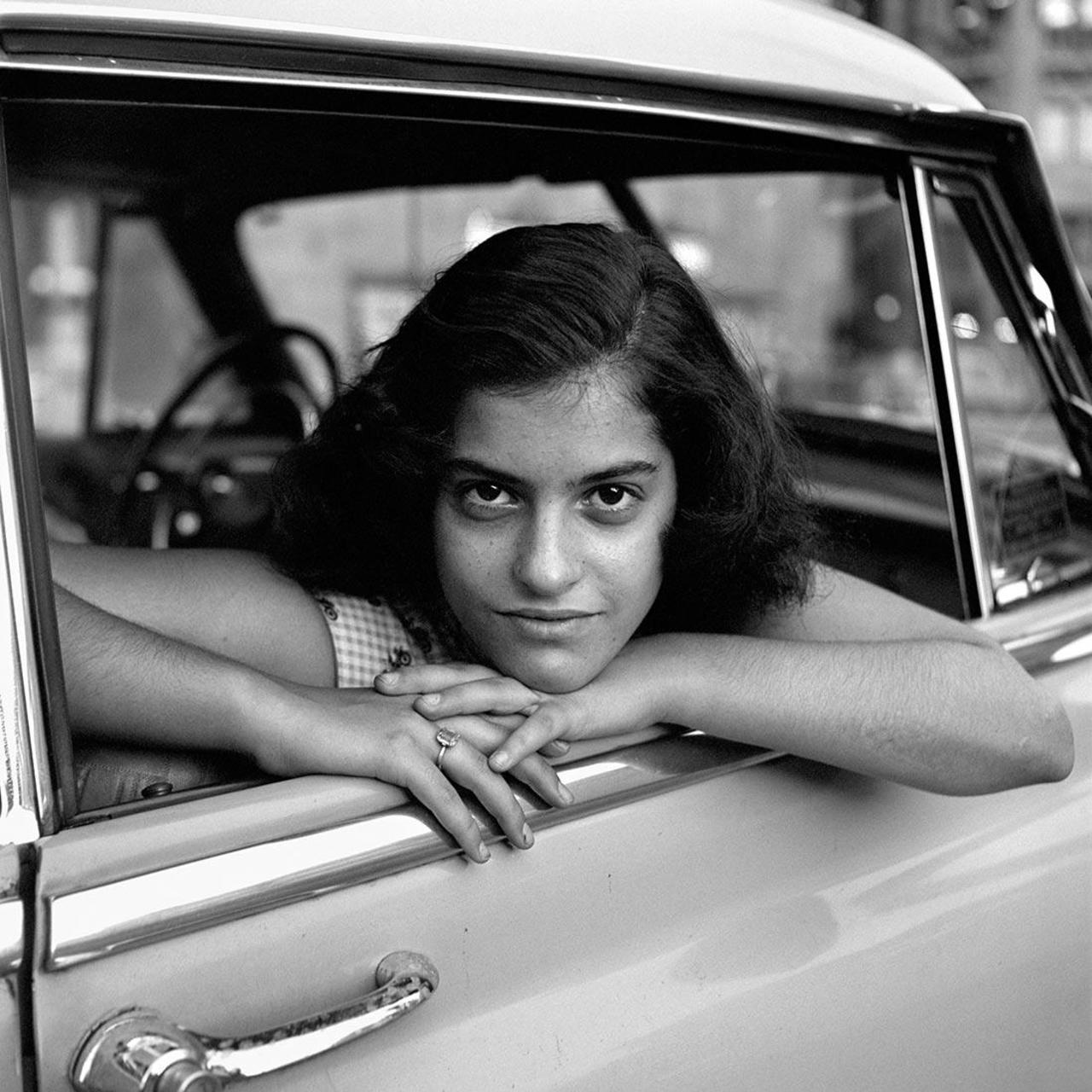 The fact that Maier seemed to keep every negative she ever shot is crucial. As a result, we have a complete body of work, one where every frame has something important to say. In this digital age, we’re too used to reviewing our work on the backs of our cameras and then deleting them if we don’t like them. But perhaps consider that you should keep and archive everything you shoot. Take some time with each frame. Look at them and learn from them. You may find something valuable in retrospect. 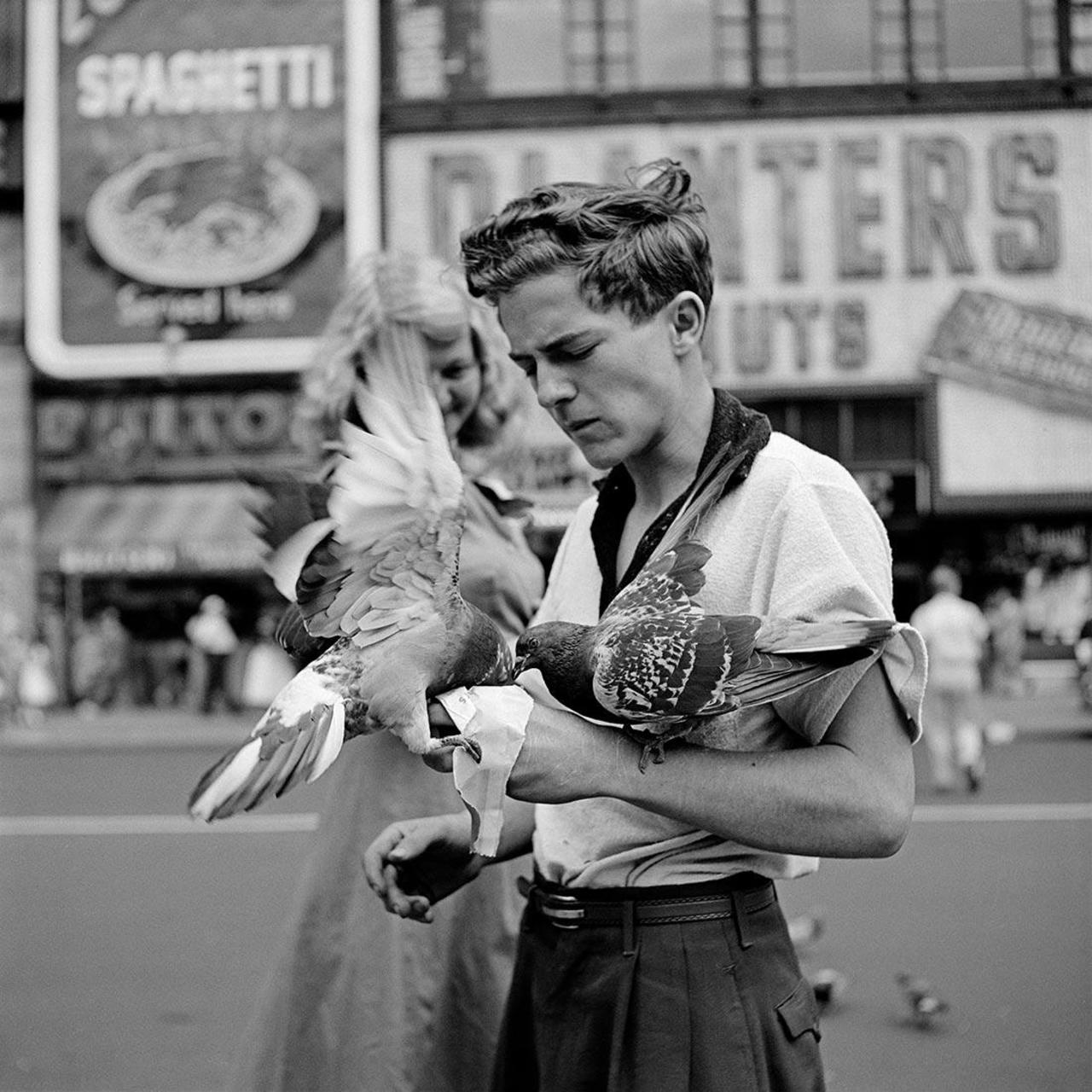 Maier’s work is so confident and considered because she was shooting a world she intuitively understood. She spent forty years moving back and forth between work and home and as a result became comfortable in her surroundings. The lesson is this: you don’t need to travel to faraway lands to wow your audience. There is beauty in the everyday details of your immediate world, no matter how mundane it may appear at first glance. 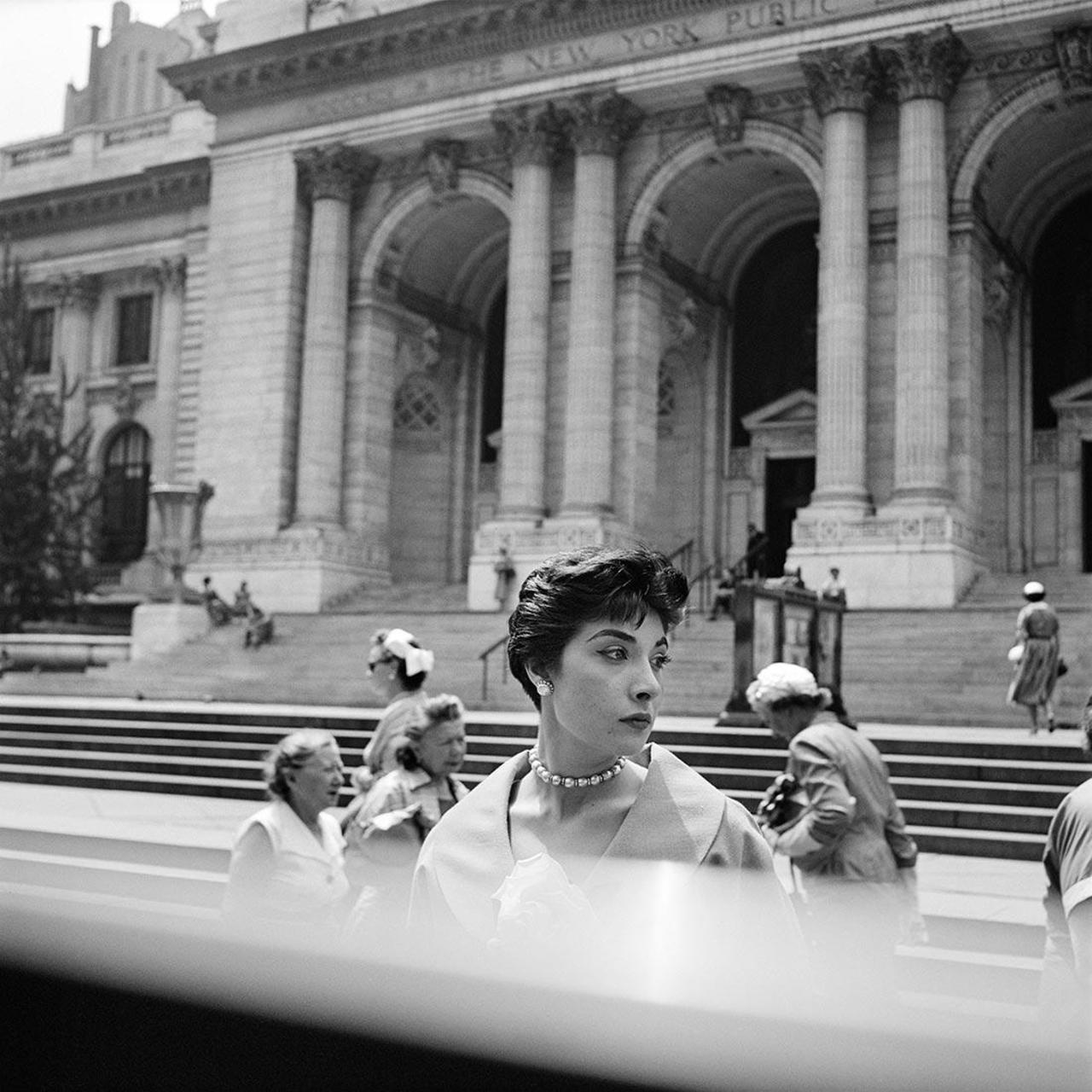 You’ll note that in many of Maier’s images there is a low point of view, almost as if they are shot from the point of view of a child. This is a result of one of Maier’s favourite cameras, a TLR Rolleiflex camera. The camera requires you to hold it at just below chest height and look down into the viewfinder which is placed on top. This is important as it meant Maier wasn’t walking around with a camera glued to her face and could remain somewhat invisible as a photographer. In that way, her images remained candid and natural. 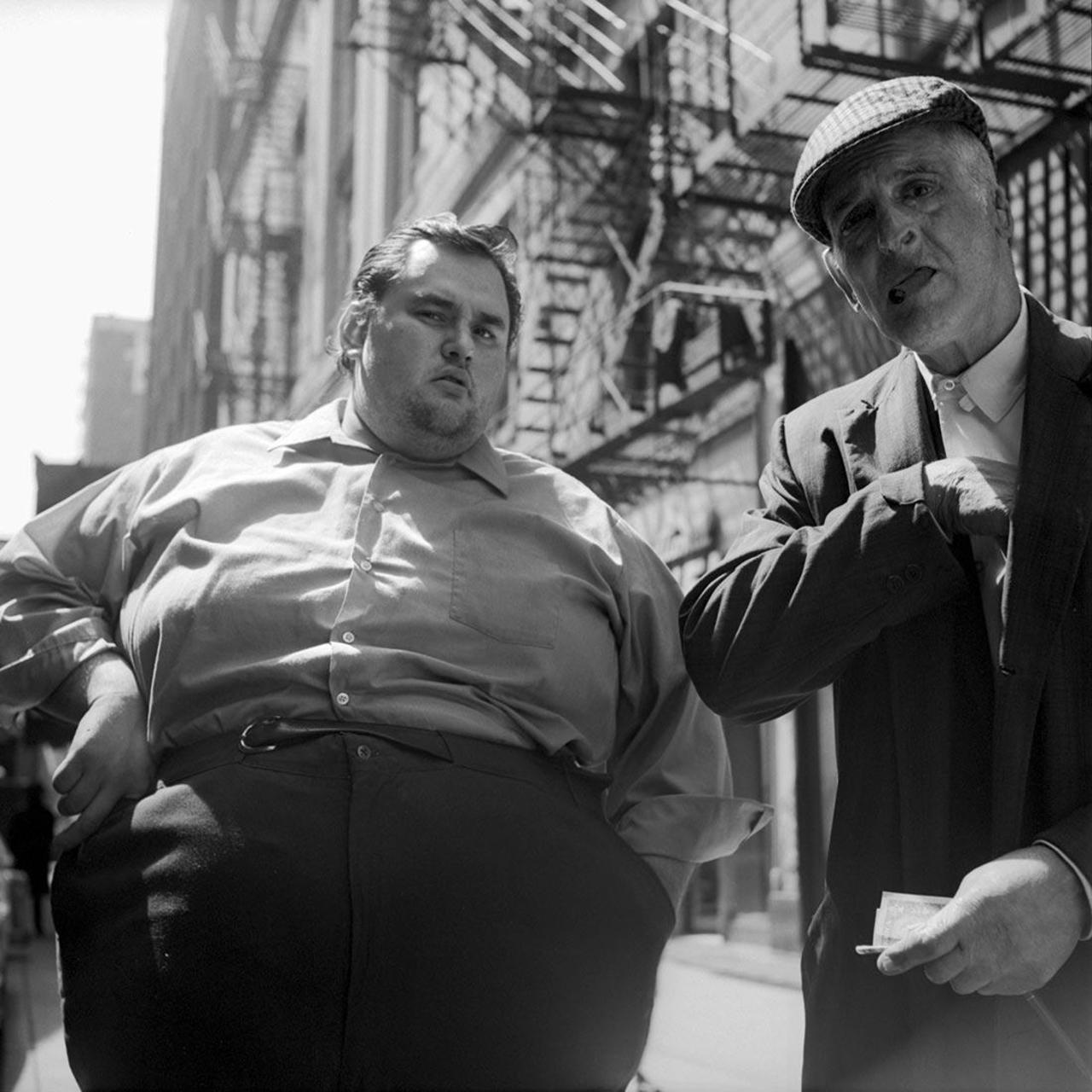 While she did sometimes shoot with colour film, Maier’s work is largely black & white. This is largely due to the time she was shooting but it’s also a great benefit for her images. Black & white removes the distraction of colour and reduces a scene down to its most basic components. When colour is absent, the viewer can focus on the formal elements of tone, shape and composition. Additionally, black & white is classic, atmospheric and, some would say, emotional. 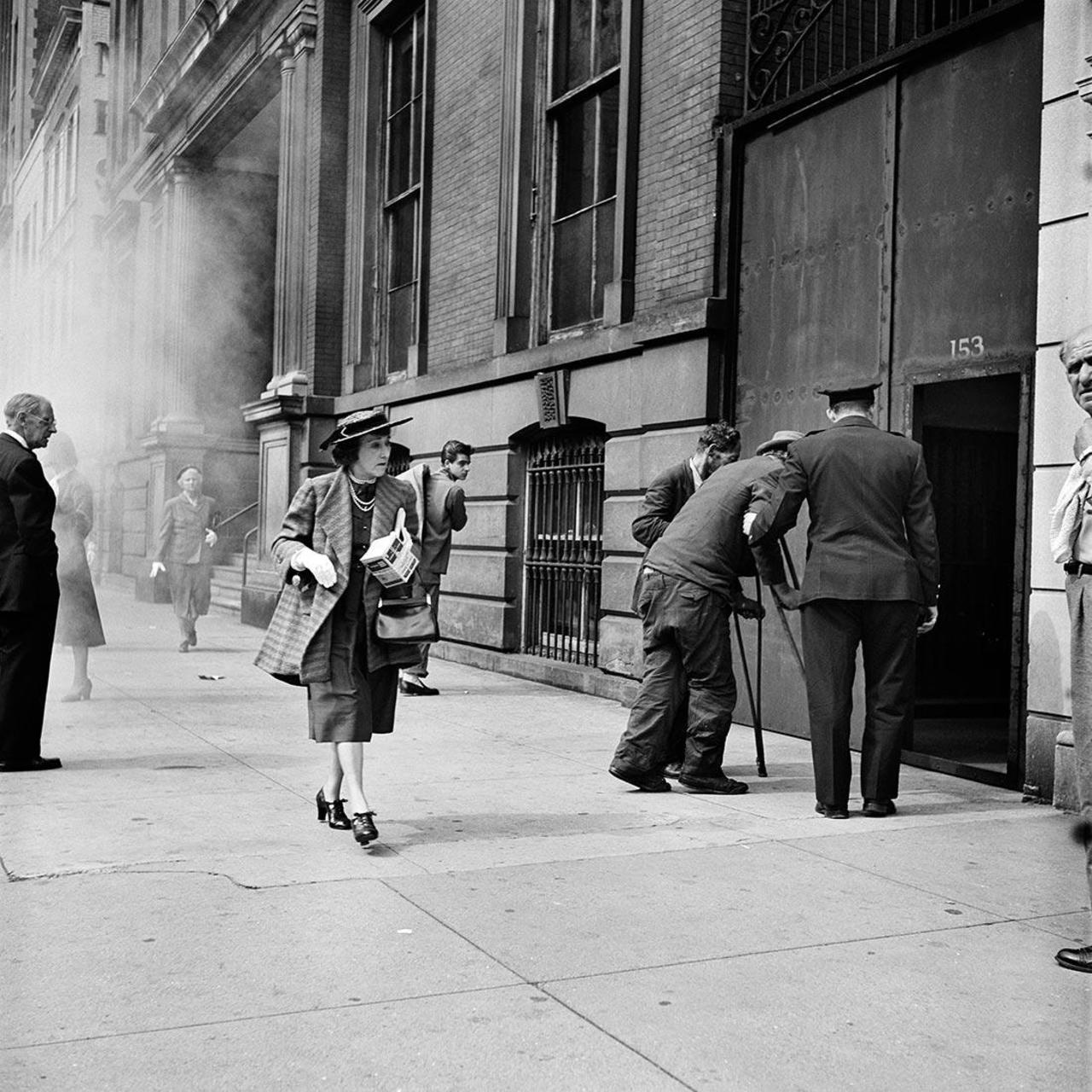 5. But don’t be afraid to experiment with colour

That said, we live in a world of bright and vivid colour. You could argue that to truly represent the world you should shoot colour frames. Maier’s images are no less effective when seen in colour and benefit from the saturated Kodachrome tones. It’s worth setting yourself a task: select a street and then shoot black & white and colour on alternate days. See what works best for you and your location. See our guide to shooting colour street photography for more on this. 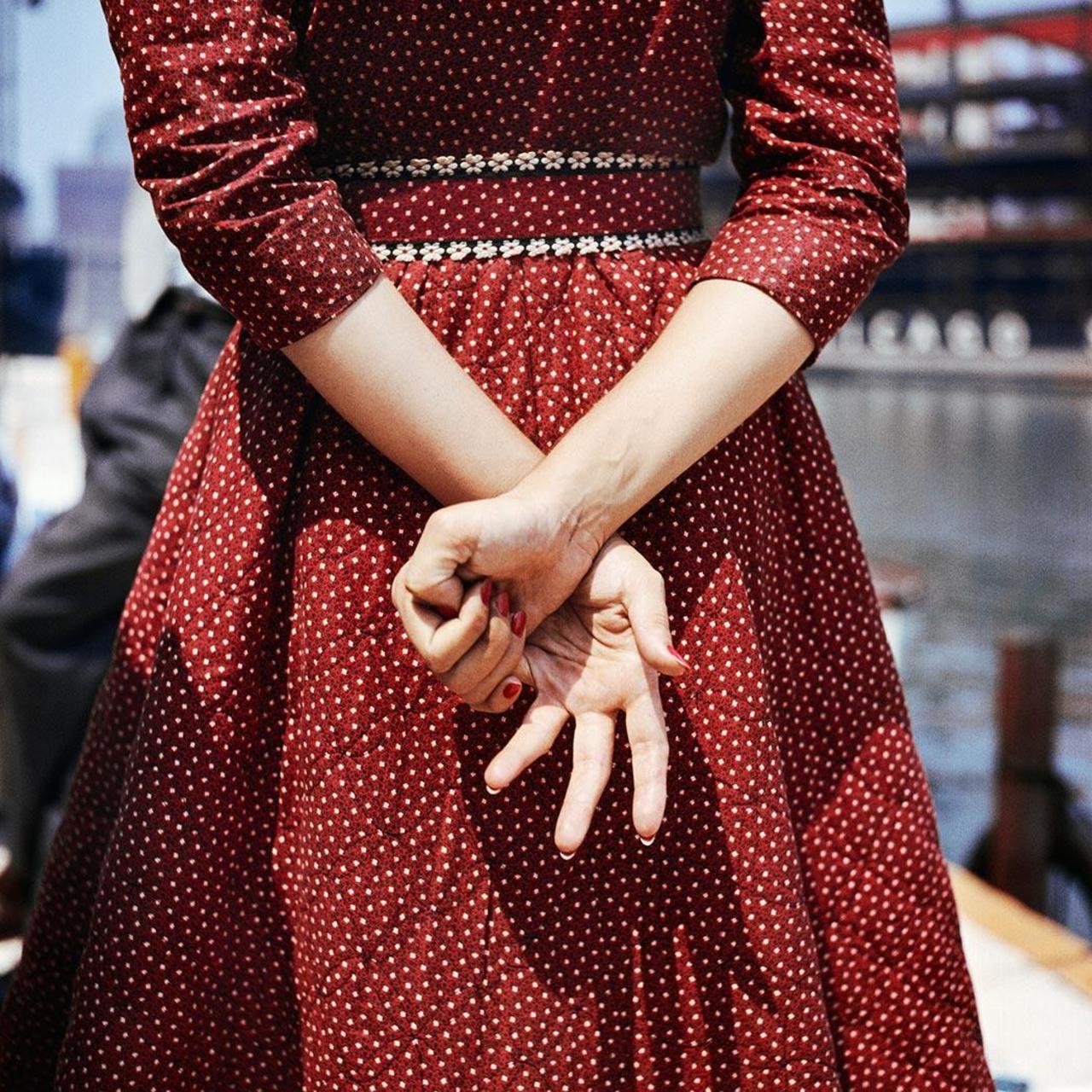 6. Shoot one and move on

If you look through Maier’s contact sheets you can see that each and every frame is distinct. No two frames are the same. As a digital photographer, you likely shoot four or five frames that you’d be hard pressed to distinguish between. As she was shooting film, Maier was limited to the number of frames she could shoot and that meant she had to slow down and consider each and every shot she took. There’s no reason not to take the same approach with digital. Slowing down and thinking about each shot means you will develop invaluable confidence as a photographer.

Maier shot for no one but herself. While it’s crucial to show people your work (as we’ll see below), you must always make sure your sole aim is to shoot images that you yourself enjoy and appreciate. Too many photographers take images in the hopes they will be commercial. If you shoot with integrity and with a confident belief in your work, this will shine through and people will respond. Often times, the audience comes to you. 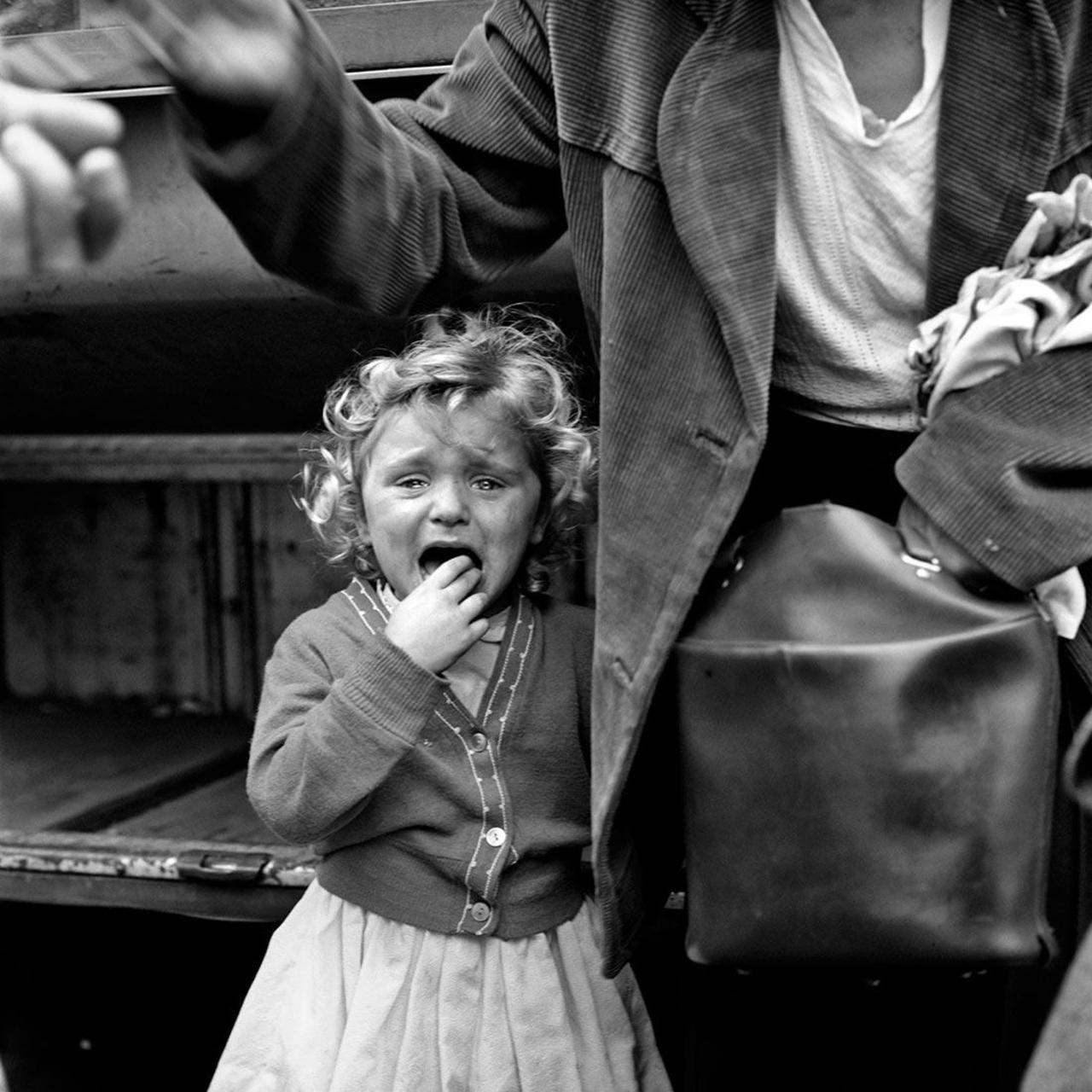 Judging from her archives, Maier shot pretty much every day for forty years. That’s a real commitment but one we are all capable of no matter how busy we are. We all have a spare half an hour each day within which we can commit to creating images. You can shoot images on your way to work, on your lunch hour, on your journey to buy milk or during a leisurely stroll around the local park. The important thing is to always have your camera on you. 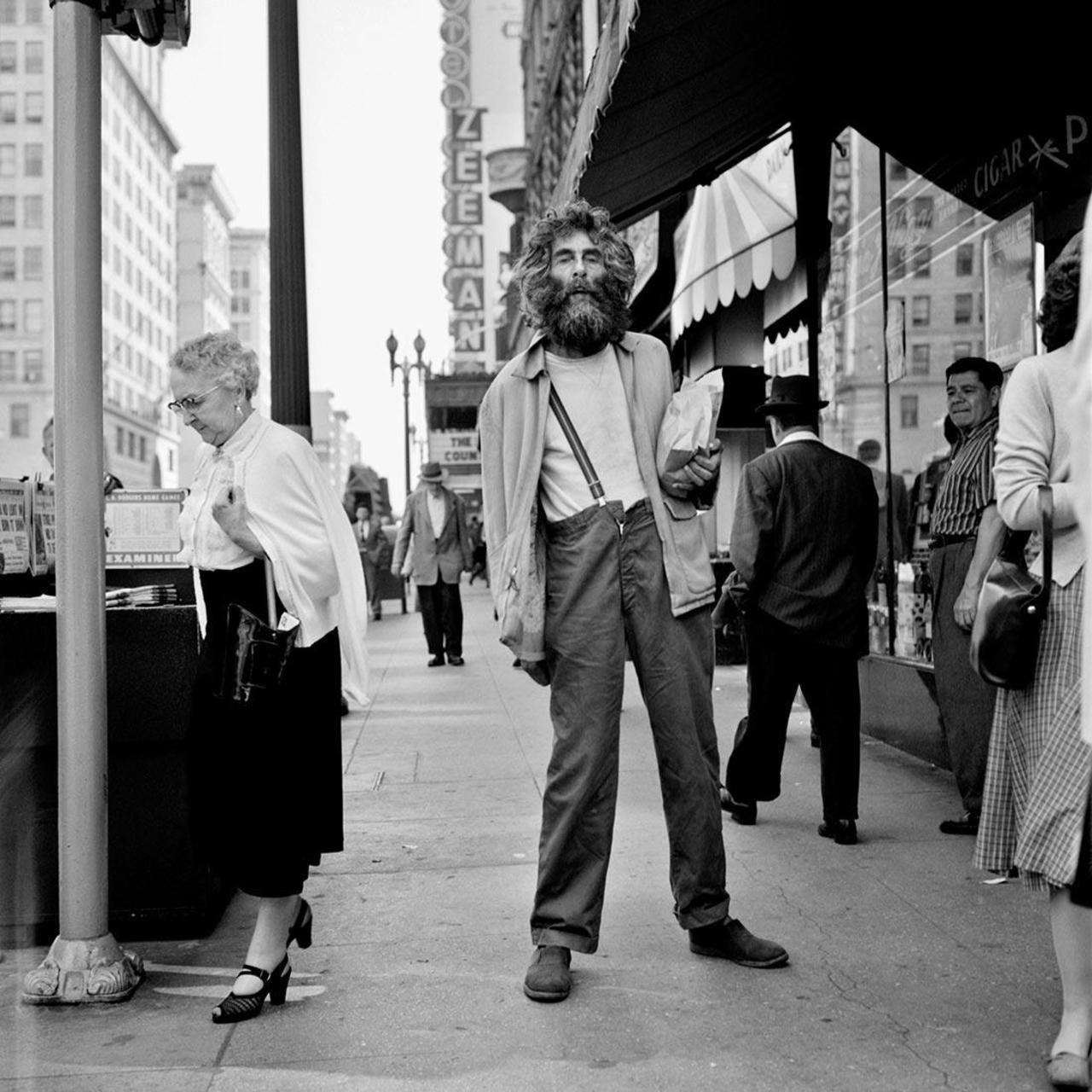 9. Turn the camera on yourself

Some of the most interesting images actually feature Maier herself, using her reflection in shop windows, car windscreens or even just her shadow. Rather than being simple selfies, these are Maier placing herself within the world she had committed to shoot. They sit comfortably within her street photography images and are a powerful reminder of the woman behind the camera. 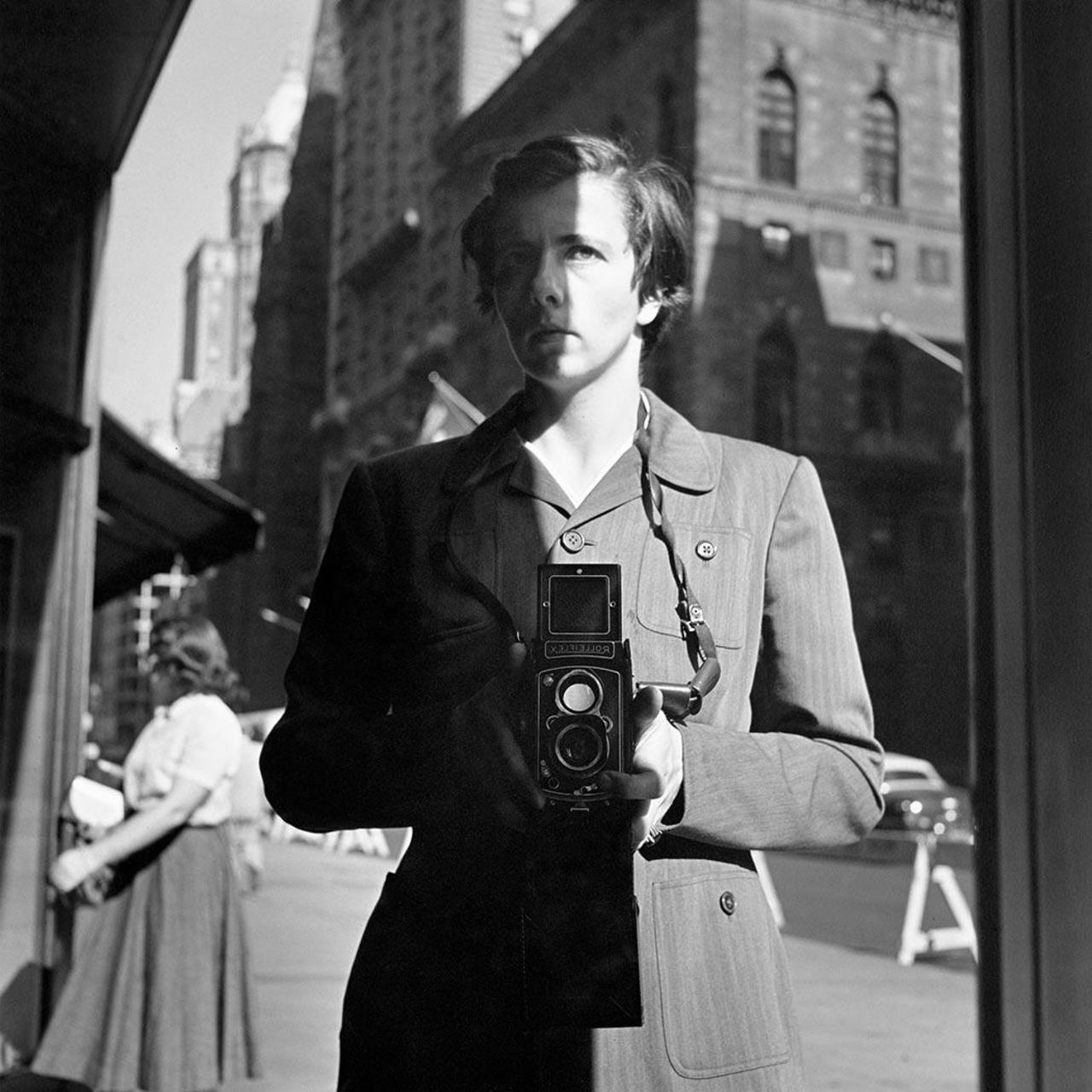 10. Show the world your work

Perhaps one of the greatest lessons we can take from the story of Vivian Maier is how crucial it is to make sure your work gets seen. Maier never knew how significant and influential her work would become because it stashed in boxes was hidden from the world. We live in an age of digital and social media meaning you have countless means to get your work into the public eye. Don’t sit on your work – be proud and show it to people. 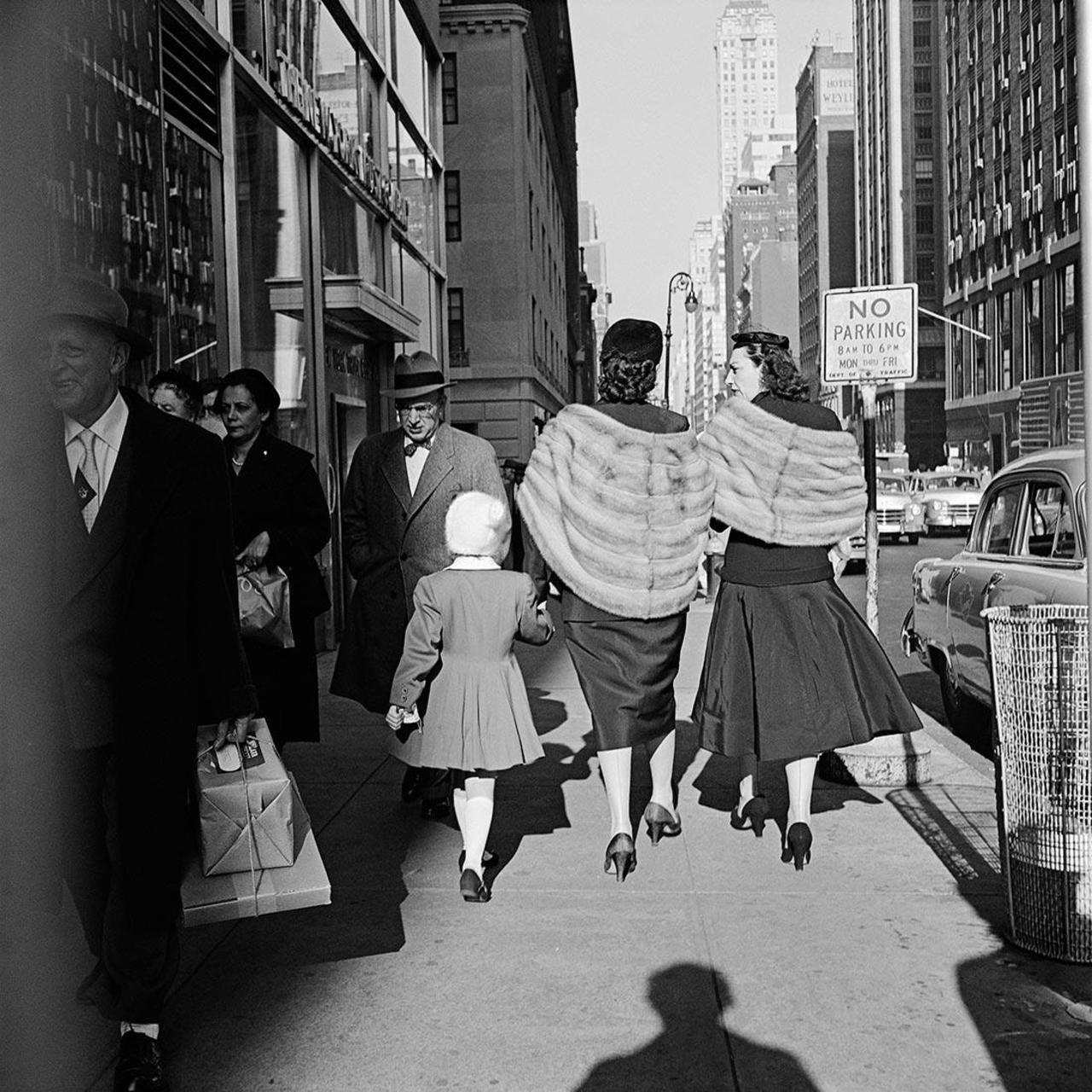 If you're an admirer of Vivian Maier's work, let us know in the comments below.